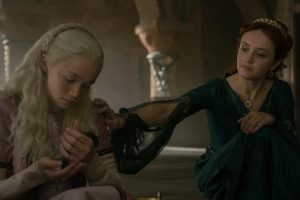 House Of The Dragon episode six sees a lot of changes, but if one thing’s constant in this HBO series, it’s the fact that the course of Targaryen familial love never did run smooth.

Warning: this article contains spoilers for House Of The Dragon episode six.

By now, we know that the Targaryens are far from a ‘normal’ family unit, and the most recent episode of House Of The Dragon shows that tensions have been brewing (in a big way) over the course of the 10-year time jump.

For now, King Viserys (Paddy Considine) is still kicking around – albeit increasingly weaker, frailer and more emotional, if his tearful breakdown over Queen Aemma’s ring is anything to go by. Alicent (now played by Olivia Cooke) is the discerning Queen who spares no time in telling Princess Rhaenyra (Emma D’Arcy) off mere moments after Rhaenyra’s given birth.

Rhaenyra leaves a trail of blood after her as she mounts the steps to Alicent’s chambers – which are now guarded by her former love interest Ser Criston Cole (Fabien Frankel) – much to the confusion of her husband and cousin, Laenor (John Macmillan). It’s a farfetched request but Rhaenyra seems intent on seeing her stepmother and showing her the newborn baby.

“Do keep trying, Ser Laenor,” the Queen says to him once she’s seen the baby. “Sooner or later you may get one who looks like you.”

House Of The Dragon: Emma D’Arcy as Princess Rhaenyra and John Macmillan as Laenor Velaryon.

HBO’s House Of The Dragon: the time jump in the Game Of Thrones prequel series, explained

If being shady was a prize worth having in this series, we’re certain Alicent would take first place. Where her younger teenage self was quietly self-assured, her adult persona seems entirely comfortable in being unapologetically disdainful to her step-daughter. It’s hard to believe the two were best friends earlier in the series, but episode six underlines the fact that Alicent can no longer stand Rhaenyra.

And it’s precisely the kind of family drama that keeps us tuning in week after week. We already knew Alicent was going to grow into a more outright and envious Queen, we knew Rhaenyra was never going to heel to her instructions and we knew that the plotlines were only going to get messier. The TV family is a format we know and love – it’s seen us through in sitcoms like Schitt’s Creek, is a major reason why we loved This Is Us so damn much and, lest we forget, the other HBO hit series Succession.

The family unit is a messy one – nobody’s perfect, after all – and there’s something about seeing it play out on the small screen that makes it something you just can’t tear your eyes away from. Perhaps it’s the acknowledgement that maybe you don’t have it as “bad” as the on-screen characters; maybe it’s just our nosy nature, but give us a meaty family drama any day of the week. Especially when it revolves around a battle for the Iron Throne with backstabbing, extra-marital affairs and surprise deaths all in tow.

Episode six of House Of The Dragon underlines how, at present, the main point of contention in this familial drama is between Alicent and Rhaenyra. Alicent hurriedly goes to confide in her husband, the King, saying: “To have one child like that is a mistake. To have three is an insult – to the throne, to you, to House Velaryon and the match you battled so hard to make for her. Not to mention decency itself.”

But the King will hear nothing negative when it comes to his daughter, talking about the “dire” consequences of such an allegation instead and tells Alicent to “not speak of this again”. This further angers the Queen and, as expected, she runs off to speak about Rhaenyra.

But in an unlikely turn of events, she angrily confides in Ser Criston, saying: “Do my senses lead me astray? Or is everyone else asleep, dreaming the same woolly dream?”

She continues: “She flaunts the privilege of her inheritance without shame. She expects everyone in the Red Keep to deny the truth our eyes can all plainly see… He’ll do nought but make excuses for her.”

Ser Criston goes on to call Rhaenyra “brazen”, “relentless” and “a spider who stings and sucks her prey dry”.

Ser Criston is the non-family member increasingly at the centre of this drama – he was once thought to be Rhaenyra’s lover, but after the debacle of episode five (which saw him morph into a murderer before our very eyes), he has now spent the past decade harbouring increasingly negative opinions of the young princess.

Ser Harwin Strong is now the romantic flame in Rhaenyra’s life, but her own unconventional family dynamic seems to be working out just fine for her. Yes, she may be having the third child that is biologically fathered by Harwin (and not Laenor), Laenor may have a secret boyfriend following him around and no wish to move back to King’s Landing and her children may finally be cottoning on to the fact that they look nothing like Laenor. But as the poised princess we’ve come to know her as, Rhaenyra seems to take everything in her stride.

While the rest of the episode sees more surprise deaths, a devious hitman plan underway and a plot to bring back the ultimate series villain (Otto, in case you needed reminding) back as Hand of the King, the drama for the Targaryens continues to unfold in a big way.

The civil war is growing ever closer, and with each passing day, the inner workings of the Targaryen clan reveal themselves to be at odds with one another, the more strapped in we get for the drama to come.

And so, as the civil war grows ever closer, and with each passing day, the inner workings of the Targaryen clan reveal themselves to be at odds with one another, the more tightly we strap ourselves in for the drama to come.

Episodes of House Of The Dragon are released weekly every Monday at 2am and 9pm on Sky Atlantic, and are also available to stream on Now with an entertainment membership.