Home » Entertainment » How to watch 'The Last Dance,' ESPN's docuseries on Michael Jordan and the 1997-98 Chicago Bulls

How to watch 'The Last Dance,' ESPN's docuseries on Michael Jordan and the 1997-98 Chicago Bulls 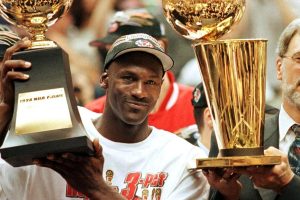 Michael Jordan is one of the most celebrated figures in popular culture and almost universally regarded as the greatest basketball player of all time. In a career filled with too many accolades to list, MJ dominated the '90s, leading the Chicago Bulls to six championships. The only years the team didn't win it all from 1992-1998 were when Jordan was either retired or trying his hand at minor-league baseball.

In 1997-98, Jordan's final season with the Bulls, an NBA Entertainment crew followed the team, capturing never-before-seen footage. ESPN has partnered with director Jason Hehir ("The Fab Five," "Andre the Giant") to use this footage to create a new docuseries called "The Last Dance."

In addition to the footage collected in the 1997-98 season, the documentary includes new interviews featuring various people involved with the team. The trailer features appearances by Scottie Pippen, Steve Kerr, Phil Jackson, Dennis Rodman, and a modern-day Michael Jordan paired with a comically large cigar.

"The Last Dance" unfolded across 10 episodes over five weeks on ESPN. The first two episodes premiered on April 19, and two new episodes followed every Sunday. The final installment dropped on May 17. You can now watch the entire series through Netflix.

Updated on 07/24/2020 by Danny Bakst: We've updated this article to include details about how to watch the series on Netflix now that every episode has aired, plus how to watch additional content related to Michael Jordan that you can stream on ESPN+.

How to watch 'The Last Dance'

With fans (including LeBron James) pining for content in the wake of sports shutdowns, ESPN released "The Last Dance" earlier than expected. Though the documentary series was originally set to debut in June, the first two episodes premiered on April 19 at 9 p.m. ET via the ESPN cable channel. The docuseries concluded with its final two installments on May 17.

"The Last Dance" is presented in up to 4K Ultra HD resolution through Netflix. With that said, you will need to subscribe to the Netflix Premium plan in order to watch the series in 4K.

The Netflix app is available on most connected devices, including smart TVs, streaming players, and iOS and Android smartphones.

Get more Michael Jordan with ESPN+

If a 10-part docuseries just isn't enough to sate your appetite for content about Michael Jordan and his legendary run with the Chicago Bulls, then ESPN+ has you covered. While "The Last Dance" itself is not available on ESPN+, the subscription streaming service has released a historical version of its popular sports analysis show "Detail".

Additionally, if you never got a chance to watch Jordan play in his heyday, ESPN+ has also released 15 classic Chicago Bulls' games from 1986-98. Get a first-hand look into why so many people agree that Michael Jordan is the greatest basketball player to ever hit the hardwood. The last batch of games dropped on Sunday, May 17, to coincide with the last two episodes of "The Last Dance."

You can sign up for a monthly subscription to ESPN+ for $4.99 a month, or a yearly subscription for $49.99 a year. You can access ESPN+ via the existing ESPN app. You can also bundle ESPN+ with Hulu and Disney+ for $12.99 a month.