Just over a century ago, early on the morning of March 7, 1912, a telegram arrived at The New York Times announcing that Roald Amundsen, the Norwegian explorer, had sailed into Hobart, Australia. For more than a year Amundsen had been in Antarctica, racing a British party led by Robert Falcon Scott to be the first to the South Pole. From Hobart, Amundsen filed a dispatch to The Times: his account of the journey, around 2,000 miles in 99 days, to the Pole and back. He’d reached it first, on Dec. 14, 1911.

Scott reached the Pole five weeks later. He and his party were still struggling toward the coast when Amundsen’s account was published, but news of Scott’s fate wouldn’t arrive until that fall. Late in March, he and his men succumbed to the brutal conditions. Their remains were found by a search party eight months later.

Now another race is playing out over the frozen continent. Two men, Colin O’Brady and Louis Rudd, are each attempting to become the first person to cross the continent alone and unsupported. But where readers waited months for news of Amundsen’s return, today The Times is tracking the two men’s progress almost in real time. 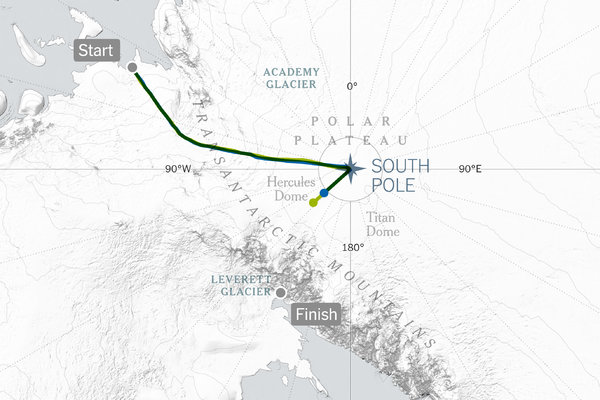 Adam Skolnick, a freelance reporter who often writes about extreme athletes and brought the story to The Times, has been covering the pair since before they began their parallel treks. Communicating with Mr. O’Brady and Mr. Rudd over satellite phones, tracking their movements through their GPS systems, and corresponding regularly with their expedition teams, he is now providing regular updates to Times readers in print and online.

While it’s naturally exciting to cover the undertaking, Mr. Skolnick also finds himself worrying about the men. “They’re tired every day, worn out every day. It’s hard to get a full read on everything they’re feeling, but they’ve sounded worn down at times,” he said.

But that Antarctica is so dangerous is, of course, part of the allure. “There are few big challenges left that are doable,” said Randy Archibold, a deputy sports editor at The Times. “The Antarctic, I wouldn’t say it’s the next Everest, but I think it’s drawing a lot of interest because it’s so mysterious, and is a sort of unconquered terrain.”

Before the two men set out, Mr. Skolnick spent a week with them and their teams in Punta Arenas, Chile, observing their preparations. Mr. O’Brady had announced his intentions only weeks before, surprising Mr. Rudd, who had been publicly preparing since April and was not expecting competition. The prospect of rivalry loomed. “Colin and Lou hadn’t met yet, and we went to that Shackleton bar in Punta Arenas wondering how it was going to be,” Skolnick said of the competitors’ first meeting at a favorite hotel of the storied explorer Ernest Shackleton. But what was tense at first gave way quickly to a warm friendship between the two.

Mr. Skolnick, working now from California, has spoken with both over satellite phone since they began their journeys, and he can exchange text messages with Mr. O’Brady. Each explorer has enough bandwidth to upload one photograph of his journey each day, which often takes hours to transmit.

Every morning, Mr. Skolnick pulls the most recent coordinates transmitted by the men’s GPS trackers to update a map on The Times’s website. It displays each of their locations along with the distances they traveled the previous day, their total distances traveled and their elevations. “The idea was always three really good pieces, one at the beginning, one in the middle and one at the end,” Sam Manchester, a deputy sports editor, said of The Times’s coverage plans for the trek. But they wanted to do more than traditional stories, he said: “The thing we really felt we needed to do is give readers a way to follow these guys.”

As Mr. O’Brady and Mr. Rudd progress through the final leg of the route, after almost two months alone on the ice, the team at The Times has begun to hold its breath. “I’m worried about them more so now, because this is the time when they could have problems,” Mr. Skolnick said. “It’s hard not to think about what they’re going through.” The memory of Henry Worsley, a friend of Mr. Rudd’s who died while attempting the same journey two years ago, is never far from mind.

And while the danger is very real, so is the prospect of making history, of completing a journey no one has ever managed. “If there’s a cooler thing going on right now than two guys ski-racing across Antarctica, I’d like to see it,” Matt Futterman, a deputy sports editor, said. “It’s the most amazing thing you can imagine.” And so The Times will continue to monitor both men’s progress, with regular updates as they approach the finish, which is expected in early January.

Meanwhile, at the bottom of the world, the two men struggle on.