Hulk Shares Importance of Spandex in Trailer for 'She-Hulk: Attorney at Law' 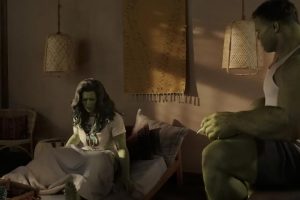 Beyond the film announcements, Marvel Studios touched on its Disney+ series releases during its San Diego Comic-Con panel. The studio even delivered an official trailer for the upcoming series which highlights the tone of the series.

The trailer, Jennifer Walters is seen living with her cousin Bruce Banner on a remote island. Leaning into his Professor Hulk knowledge, Banner is seen documenting and testing She-Hulk’s newfound powers. Scenes show how She-Hulk looks to have greater mastery of her gamma radiation imbued powers, though Hulk is still able to teach her about the importance of spandex.

Later in the trailer, Walters is seen easing into her new role as a lawyer specializing in cases involving superhumans. Representing Emil Blonsky, the former special-ops commander that tried to kill the Hulk and became the Abomination. The look at the series ends with a brief look at an interaction between She-Hulk and Charlie Cox‘s Daredevil.

Watch the official trailer for She-Hulk: Attorney at Law hitting Disney+ August 17 above.