Home » Entertainment » ‘I Am the Night’: Patty Jenkins and Chris Pine Explore the Black Dahlia Mystery

‘I Am the Night’: Patty Jenkins and Chris Pine Explore the Black Dahlia Mystery

LOS ANGELES — “Do you know what today is?” asked Patty Jenkins on a rainy Tuesday in January. Chris Pine shook his head.

It was a morbid anniversary: Seventy-two years before, Elizabeth Short, an aspiring actress known later as the Black Dahlia, was brutally murdered and dismembered, possibly in the bowels of the mansion where they sat — the Sowden House, built by Lloyd Wright (a son of Frank’s). It was home briefly to George Hodel, a prominent gynecologist who was widely suspected of the murder.

Mr. Pine was familiar with the story. Fresh off their success with “Wonder Woman,” in which Mr. Pine starred under Ms. Jenkins’s direction, the two of them had filmed a TV project here in 2017 tied to the Black Dahlia murder of 1947.

“I got a little nauseous,” she said about visiting the house’s basement. “And dizzy.”

A dizzying setting, perhaps, but appropriate for the project she was filming, which debuts Monday: “I Am the Night,” a six-episode limited series on TNT starring Mr. Pine that is loosely based on the 2008 memoir “One Day She’ll Darken” by Mr. Hodel’s granddaughter, Fauna Hodel. A noir-soaked mystery set in 1965, the series is a return to TV for Ms. Jenkins and the realization of a passion project over a decade in the making.

Ms. Jenkins first became interested in bringing Ms. Hodel’s story to the screen in 2008 when a mutual friend introduced the two women. “She laid on me the most incredible true story,” Ms. Jenkins said of that first encounter with Ms. Hodel, who went on to become a close friend. “And I was just so completely blown away by it that I couldn’t stop thinking about it and talking about it.” 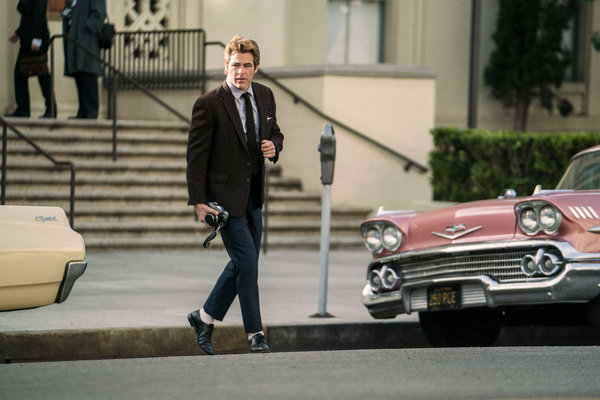 A white girl raised by her adoptive black mother to believe she was of mixed racial origins, Ms. Hodel had a difficult upbringing in Nevada, unaware of her true background. In search of her biological mother, she traveled to Los Angeles — only then to discover her family’s shadowy past. Vanity Fair later called her memoir “the stuff of which movies are made.”

Ms. Jenkins agreed, originally conceiving of the project as a film — at one point, Oprah Winfrey’s Harpo Productions was attached. But the material proved ultimately too dense for a feature, and the project sat in limbo. The idea of the limited series wasn’t as “chic,” she said, before the success in 2014 of HBO’s “True Detective.”

With the blockbuster success of “Wonder Woman” in 2017, which earned nearly $822 million, Ms. Jenkins’s career reached new heights. “Wonder Woman” gave her leverage, but that achievement also made it somewhat surprising that “Night” landed at a basic-cable network better known for sitcoms and procedurals.

“I don’t see anything as too minor or too major,” said Ms. Jenkins, who followed up her Oscar-winning debut feature, “Monster,” by directing episodes of “Arrested Development” on Fox. “I like to do things I believe could be great. Not only did TNT get it, but they were excited about it.”

The network happily accommodated the short window she had at the end of 2017 to direct the first two episodes. She then handed the directorial reins over to Victoria Mahoney (“Seven Seconds”) and Carl Franklin (“Devil in a Blue Dress”) and left to begin preproduction on “Wonder Woman: 1984,” scheduled for release in 2020.

The episodes this team created for “I Am the Night” are heavily fictionalized, though based on Ms. Hodel’s gripping memoir. In the pilot, a teenage version of Ms. Hodel (India Eisley) is presented as a Little Red Riding Hood in search of her grandfather. As all manner of wolves close in, she befriends Mr. Pine’s character, Jay Singletary, a once-promising journalist whose career has been destroyed by George Hodel (Jefferson Mays).

Mr. Pine, who played the love interest in “Wonder Woman,” jumped at the chance to work again with Ms. Jenkins, who first told him about the project on the set of “Wonder Woman” in 2016.

“She always has myriad ideas that she’s bandying about that she’ll see if I respond to,” said Mr. Pine, who has spent nearly half of the past three years working on projects with Ms. Jenkins. “But this particular one she got really excited about.”

Mr. Pine got excited, too. Like Ms. Jenkins, he is an executive producer on the series. And his character, a drug addicted Korean War veteran who’s been reduced to the tabloid hustle, presented new challenges.

“Jay is freakishly, fascinatingly, delightfully strange,” he said. “I have a greater compassion for him than I have for many of the characters I’ve played because he’s so tragic.”

Shot on location around Los Angeles, the series examines issues of identity, corruption and truth, as focused through a noir lens appropriate to its themes. As Fauna tracks her family, she also unearths the suspicions about her grandfather’s possible role in the Dahlia and other murders.

Ms. Jenkins felt that the Black Dahlia mystery — which remains unsolved, possibly because of George Hodel’s powerful connections — was the show’s “Trojan Horse”: The killer’s identity was reportedly one of Hollywood’s best-kept secrets, and it became just one of Fauna’s — both real and fictional — many painful discoveries.

“Nobody can prove exactly what happened to the Black Dahlia, but the people involved with this story uncovered incredible complexities about themselves,” said Ms. Jenkins.

“I Am the Night” is the first proper collaboration between Ms. Jenkins and her husband, the author Sam Sheridan (“A Fighter’s Heart”). It was Mr. Sheridan, a noir fan and the series’s showrunner, who thought to cast Mr. Pine, who had played the comely Captain Kirk in “Star Trek,” as the troubled journalist.

The suggestion appealed to Ms. Jenkins, who saw Jay’s desperation and gallows humor as a refreshing change for her friend.

“This character had shades of Chris that I hadn’t gotten to see him express,” said Ms. Jenkins. “It’s getting into that vibe of somebody who really doesn’t like themselves and their place in the world. When he was super young, he always had to play the handsome leading man.”

Seated together in a small windowless room of the Sowden House, Mr. Pine and Ms. Jenkins exuded unmistakable chemistry. (“You end up with a shorthand,” Ms. Jenkins observed. “That’s why we were able to work so fast.”) He teasingly wondered if the built-in aquarium reminded her of her deceased pet Fishtopher.

“Patty has a relationship to fish that one would have with a dog or a cat,” he joked. She waggled her fingers around her face to illustrate how the Japanese fighting fish used to greet her. They erupted with laughter.

Their tight working relationship was quickly forged on the set of “Wonder Woman.” Ms. Jenkins explained that it had been extremely challenging to cast the part of Wonder Woman’s love interest, Steve Trevor, whom she felt was often neutered in previous, primarily male interpretations.

“Imagine if Lois Lane was dull as dishwater?” she said. “We’re making a movie for women, as well, this time. I was looking for someone hilarious and cool, but who also had a funny dynamic with emasculation, in a way that made it a two-hander.”

Mr. Pine had turned down the “Wonder Woman” role in 2015 when another director was attached. But within five minutes of meeting with Ms. Jenkins, who acted out an abridged version of the film as part of her pitch, he was sold. (He is reprising the role in the sequel.)

Ms. Jenkins has become a dependable teller of gruesome tales about women and violence. In addition to “Monster,” based on the life of the serial killer Aileen Wuornos, she also directed the somber pilot for AMC’s whodunit drama “The Killing.” What captivated her most about Ms. Hodel’s story, though, was not its sordid nature, but Ms. Hodel’s resilience and joy.

“I’m a filmmaker because I’m interested in people and what is possible in this world,” she said.

Ms. Hodel, who had breast cancer, did not get to see the project completed: She died in September 2017, having read only the pilot script. Her daughters, however, Rasha Pecoraro and Yvette Gentile, were granted generous access to the set during production.

“It brought mom back to life for us,” said Ms. Gentile.

Their podcast, “Root of Evil,” debuts Feb. 13 and will further explore events from the family’s perspective. The podcast will feature tape-recorded interviews with family members conducted by Ms. Hodel, who continued to search for answers all her life.

Ms. Jenkins said she wanted to believe her friend would have liked the series.

“It’s always the thing I am most nervous about, with anybody’s true story,” she said. “We tried to honor the truth of her character as much as we could. Hopefully her wonderful spirit permeated everything.”