'I ignore it', artist Hockney says on upcoming record-sale hype 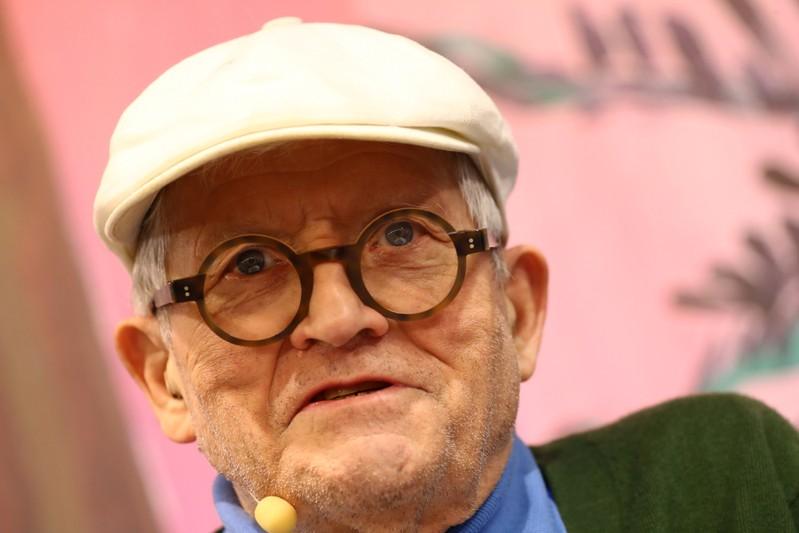 LONDON (Reuters) – When David Hockney’s “Portrait of an Artist (Pool with Two Figures)” goes under the hammer next week with an estimate of $80 million, the sale could set a record for the most expensive work ever sold at auction by a living artist.

But the 81-year-old, known for his colorful depictions of Los Angeles swimming pools and the countryside of his native Yorkshire, is brushing off the attention.

“I ignore it,” Hockney told Reuters on the sidelines of an awards ceremony late on Wednesday. “I have the vanity of an artist, I want my work to be seen, but I don’t have to be seen.”

Set against a lush green landscape, “Portrait of an Artist (Pool with Two Figures)” is one of Hockney’s most famous works, depicting a man in a pink jacket looking down on another figure swimming underwater in a pool.

Composed ahead of a exhibition in New York, the 1972 canvas was inspired by two photographs, including one of Hockney’s former partner.

Auction house Christie’s, which says the painting is “poised to become the most valuable work of art by a living artist ever sold at auction”, estimates a price tag “in the range of $80 million” for its Nov. 15 sale in New York.

If it meets that figure, that would smash the price tag of current record holder, Jeff Koons’ stainless steel “Balloon Dog (Orange)” sculpture, which sold for $58.4 million in 2013.

Hockney, who recently designed a stained glass window in honor of Queen Elizabeth at Westminster Abbey, is considered one of Britain’s most influential artists.

On Wednesday night, he was recognized with an award for his contribution to printmaking by Norway’s Queen Sonja’s art foundation. Asked about future projects, Hockney said he had set his sights on France: “I am planning to travel to Normandy next year to do the arrival of spring.”