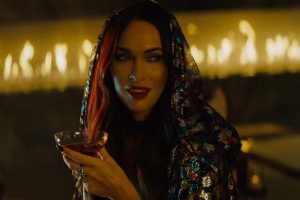 If you’ve spent the last 12 years with a vivid yet fond memory of Megan Fox ripping men’s throats out with her teeth in Jennifer’s Body, please take a deep breath and mentally prepare yourself before you hit play on Netflix’s Night Teeth trailer. Set in Los Angeles, Night Teeth delves into the story of Benny (Jorge Lendeborg Jr.), a college student and chauffeur whose night takes a dangerous turn when he picks up Blaire (Debby Ryan) and Zoe (Lucy Fry), two bloodthirsty vampires who are on a mission to paint the town red in more ways than one.

Under the guise of party hopping, Blaire and Zoe force Benny to drive them all across the city to track down their victims. As the night rages on, Benny is thrust into the middle of a war between rival vampire clans and the protectors of the human world, including his brother Jay (Raúl Castillo). With sunrise threatening to peek over the horizon, Benny is caught between the fight to stay alive and the fear of giving into temptation.

While it’s not exactly the college-girl-possessed-by-a-demon story many of us know and love, the vampire-packed film does feature Jennifer Check herself, aka Fox, as an unnamed vampire with a wine glass full of blood in one hand and a twinkle in her eyes. Details about her character haven’t been released yet, but we don’t need names to know that she’s at the top of the undead food chain. The film will also star Game of Thrones alum Alfie Allen as Victor, The Voyeurs star Sydney Sweeney as Eva, Alexander Ludwig as Rocko, and American Horror Story‘s Ash Santos as Maria.

As we chatter our teeth in anticipation, see the trailer for Night Teeth above and watch the full film when it premieres on Netflix on Oct. 20.