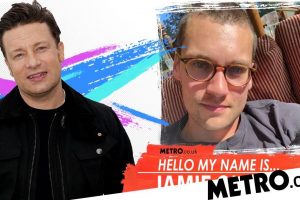 When the Naked Chef came out in 1999, I had just moved to a new school.

Being a four-year-old, the new kid, and having the name of a famous chef wasn’t exactly conducive to making friends.

When you’re a kid, you’re immediately in the spotlight for having a silly name before you’ve even said or done anything. It can really knock your confidence as people will have a preconceived idea of you and make jokes at your expense before you can even get a word out.

It used to play on my mind before meeting new people, and I distinctly remember summer sports camps and the feeling of dread I would getting waiting for my name to be read out from the register.

Hello, My Name Is…

It’s not easy having the same name as someone, or something, famous.

In Metro.co.uk’s weekly Hello, My Name Is… series, we’ll hear the funny, surprising and frankly mundane stories of people whose parents really didn’t know what they were getting their children into.

Email [email protected] if you would like to get involved.

When it was there was a chorus of sniggers and comments like, ‘TV work dried up, has it?’ or ‘Can you cook?’.

While the pure embarrassment has subsided now, it really annoyed me at the time. My name still sometimes frustrates me.

Nowadays people normally just giggle and respond with, ‘surely not!’. I’ve even had to flash my ID on a couple of dates – to both the lucky lady and the maître d’!

Occasionally I still get people asking whether I cook, too.

At least with that question I get to change the subject as I do, in fact, cook. From an early age I was aware of people in the kitchen, whether that be parents or family friends, and it turned into a real passion of mine.

Cooking and entertaining, along with sustainable sourced local and British produce, is my true love. So much so that I have launched a private dining venture.

I revel in hosting dinner parties in my flat for a whole range of people. Sometimes friends, sometimes businesses, and sometimes singles (a bit like Fifteen – one of Jamie Oliver’s former restaurants – meets Take me Out).

Still, I don’t think the association with my namesake has benefited me much. Suppliers for my business do find it rather funny when you try to set accounts up – especially the ones who have worked with him before.

And even though I seem to get a reaction from every waiter and receptionist when booking a table, I’m yet to reap the benefits of a free bottle of wine, a prime table, or any courtside seats – but here’s to hoping! I’ll have to work on the accent a bit more.

It’s not all bad though – I actually do like Jamie Oliver a fair amount. I think it’s great what he’s done trying to tackle national health problems with something he’s pretty good at, and it’s great that he seems to be passionate about getting people eating fruit and veg.

He’s stuck to his guns, instead of what will make him popular.

Still, I think his Italian venture was doomed to fail. He’s a cook, in my opinion, not a chef, and needs to stay in front of the camera and not behind the pass in a restaurant.

While I imagine most people who share names with celebrities would want to meet their famous counterparts, there are other famous Jamies and Jameses that I really look up to that I would rather cross paths with.

James Lowe at Lyle’s, for example. I love his food and think I’d get a lot more from that meeting!

I worry that the more I progress in the field of dining, I might have to change my professional name for fear of confusion – but I’ll definitely keep my name legally as is (not just because it would upset my parents to change it).

One thing I have in common with Jamie Oliver though is that I promise to never serve Turkey Twizzlers to my guests.

END_OF_DOCUMENT_TOKEN_TO_BE_REPLACED

END_OF_DOCUMENT_TOKEN_TO_BE_REPLACED
We and our partners use cookies on this site to improve our service, perform analytics, personalize advertising, measure advertising performance, and remember website preferences.Ok