Barbara Mundel takes over as artistic director of the Münchner Kammerspiele, lately perhaps the most consistently exciting playhouse in Germany. 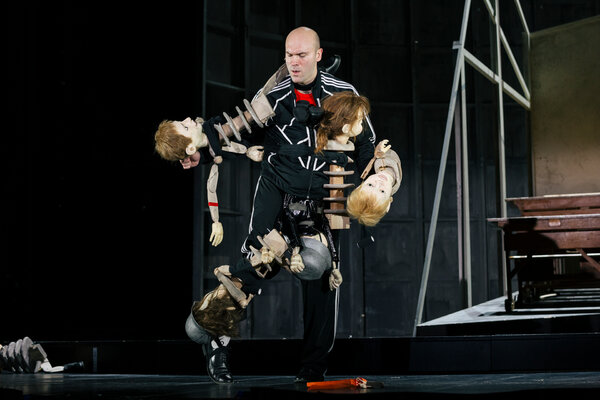 MUNICH — Barbara Mundel had hoped to start her tenure as artistic director of the Münchner Kammerspiele here with an outdoor production featuring 150 Munich residents in a colorful self-portrait of the city.

But the coronavirus put the brakes on that performance, along with other planned festivities to mark her arrival at the Kammerspiele, where she is the first female artistic director.

Mundel, a 61-year-old native of Hildesheim, in northern Germany, has big boots to fill. During the brief, creatively restless tenure of her immediate predecessor, Matthias Lilienthal, the Kammerspiele became perhaps the most consistently exciting playhouse in the country.

But even in the midst of a pandemic that has brought cultural life in much of the world to a halt, Mundel’s first season is an ambitious and varied program — although there were some slip-ups in the Covid protocol during the opening performances.

The most impressive entry was Jan-Christoph Gockel’s production of “A Youth in Germany” (“Eine Jugend in Deutschland”), based on Ernst Toller’s autobiographical novel from 1933.

An Expressionist playwright and left-wing politician, Toller briefly served as the president of the Bavarian Soviet Republic in 1919 and spent five years in prison after its demise. As a socialist and a Jew, he was then exiled when the Nazis came to power. He ultimately settled in New York and in 1939 took his life in a Central Park West hotel room.

In this sprawling production, Gockel in effect creates his own Expressionist play out of episodes from Toller’s rich biography and plays.

A sizable cast, mostly drawn from the Kammerspiele’s acting ensemble, scrambles through half a dozen scenes, from Toller’s school days to his harrowing experiences in the First World War to the 1919 assassination of the socialist politician Kurt Eisner. 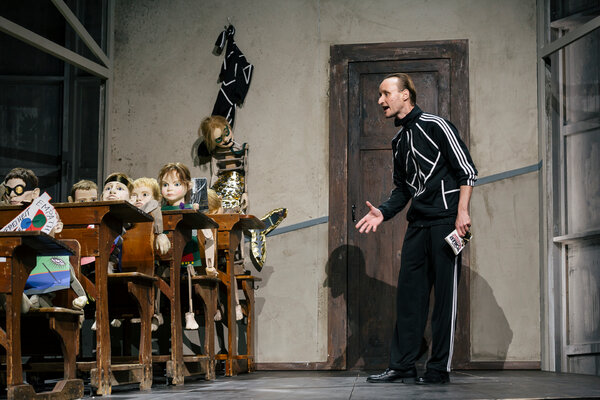 Puppets created by Michael Pietsch crowd both a classroom and the trenches. A silent film mixing Expressionism with slapstick portrays the Eisner assassination and its aftermath. The piece features Gro Swantje Kohlhof, one of the Kammerspiele’s best young actresses, in no fewer than six roles, while live actors narrate onstage. Elsewhere, Kohlhof assumes an outrageous French accent as Napoleon, who makes a bet with Saint Francis for Toller’s pacifist soul in a riff on the writer’s 1935 play, “No More Peace.”

“A Youth in Germany” invites us to compare the upheavals of a century ago with our own age of anxiety. A more explicit artistic response to the way we live now is “Touch,” a world premiere written by Falk Richter, who belongs to the theater’s new artistic team.

Working with the choreographer Anouk van Dijk, Richter has corralled a large and international cast of actors and dancers for this chaotic show, in which monologues and lectures explore lockdown-induced malaise, societal erosion, white fragility and racism.

Ironically, some audience members (myself included) were accidentally seated next to strangers, in clear violation of distancing protocol. Luckily, there was enough space to spread out in the main auditorium, where capacity has been lowered from roughly 700 to 200. The theater later confirmed that there had been a ticketing glitch and apologized for the error. Over both weekends, the theater’s mask policy was also unclear, as many spectators removed their face coverings while seated.

Masks were the only things worn by the otherwise naked performers in “Habitat/Munich,” a dance piece choreographed by Doris Uhlich on one of the theater’s smaller stages. A dozen Munich locals perform this hourlong work for an audience of 40. Supported by techno beats, the dancers explore distancing in the social context of performance.

The dancers’ gestures and movements alternate between lyrical and violent, and the result is both absorbing and difficult to watch. Bodies of various ages, shapes and sizes seem to be revealed in all their strength and vulnerability. Physical contact is forbidden. Locked in their individual routines, the dancers appear radically alone.

In the finale, they crawl into large plastic bags. The group of enclosed bodies convenes in the center of the stage for a collective embrace that feels more melancholy than cathartic.

Erwin Aljukic is among the “Habitat” dancers. An expressive performer with osteoporosis, he often dances around his wheelchair. Aljukic is a new ensemble member, seemingly evidence of Mundel’s commitment to making the theater an inclusive space for differently abled performers.

That sentiment is on display in “It’s Me Frank,” a main stage production starring Julia Häusermann, an engaging Swiss actress with Down syndrome. In this hourlong performance, Häusermann introduces herself, sings along to cheesy pop songs, dances and interacts with audience members. Yet despite her charisma, Nele Jahnke’s video- and music-heavy production feels slight, with hardly enough ideas to sustain its length.

The Kammerspiele’s final two premieres suggest continuity with the Lilienthal era, when foreign theater collectives and authors were often invited to work at the house. “The Assembly,” a co-production with the Canadian documentary theater group Porte Parole, is also the most overtly political among the premieres.

Sitting around a dinner table, actors reconstruct a political discussion this year in which four Munich residents debated a number of hot-button issues, with Annette Paulmann and Wiebke Puls as moderators.

The two actresses reprise their roles in “The Assembly,” trying to keep the discussion both on point and civil. But the talk-show atmosphere of Chris Abraham’s production, with its pop music, sound cues and TV screens, is so artificial that the fine actors aren’t able to create much heat, and the production falls flat as both political and documentary theater.

Even so, it stands head and shoulders above “Love. An Argumentative Exercise,” by the Israeli author Sivan Ben Yishai. A monologue-like text introduces us to a modern-day version of Olive Oyl, Popeye’s girlfriend. In Ben Yishai’s play, she’s a writer in Germany who meets Popeye while taking German-language classes.

For much of Heike Goetze’s production, the actress Johanna Eiworth is alone onstage while Sivan’s text scrolls across the top of a pink house. Eiworth is often naked, agitated and writhing. Things get a little more interesting after the words vanish and Eiworth recites the script herself, but the explicit and repetitive text still feels exhausting and cheap.

It’s a maddening production — I would have gladly left in the middle — but my annoyance with “Love” was countered by my admiration for how the Kammerspiele and Mundel had managed to pull off its robust opening under dire circumstances.

All in all, this initial program suggests that Mundel’s Kammerspiele will remain a place for wide-ranging, experimental and inclusive theater. I look forward to discovering more in the months to come — as well as to improvements in how the theater’s coronavirus regulations are implemented.

The Assembly. Directed by Chris Abraham.

All shows continue in repertory at the Münchner Kammerspiele.