In Nigeria, a Laid-Back Dinner Party With Chimamanda Ngozi Adichie 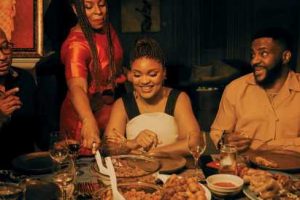 The writer hosted a dozen creative guests for jollof rice and Nigerian finger foods at her home in Lagos.

Interview by Laura May Todd

It’s tradition in Ibo culture to present your guests with an anyara, also known as a garden egg. It’s a small vegetable, similar to an eggplant, that you usually eat with spicy peanut butter before anything else — people say it’s a blessing. I love to celebrate these old traditions, so I presented each person with an anyara, which was my way of saying “welcome.”

A few guests were late, as often happens in Lagos. So we hung around for a bit, having drinks. This is a circle of people who, even if they don’t know one another well, they’re familiar with one another’s work. When everybody arrived, I went around the table doing introductions. I call these “what I love about you” moments. For example: Phyno is one of the most original musicians in Africa. Chigul is an incredible comedian. Ifeyinwa [Azubike] is a fantastic fashion designer. I believe in giving people their flowers in public.

These evenings often end with us in the living room. People sprawl out on the sofa. Somebody falls asleep. There’s something about us Africans where there’s a willingness to be flexible with rules, especially when it comes to eating. People perch with plates on their laps and their wineglasses on the floor — or whatever bit of space they find. At one point, we were having a conversation about what the difference is between a glass for red wine and a glass for white wine. My position was, “Who cares?” What matters is that you bring your calm, authentic self to the table.

The attendees: In addition to the rapper Chibuzor Nelson Azubuike, a.k.a. Phyno, 36; the comedian Chioma Omeruah, a.k.a. Chigul, 46; and the fashion designer Ifeyinwa Azubike, 40, Chimamanda Ngozi Adichie, 45, was joined in her home by the writer and visual artist Victor Ehikhamenor, 52; the actor Osas Ighodaro, 32; the TV presenter Ebuka Obi-Uchendu, 40; the music producer Chinaku Onyemelukwe, 57; the interior designer Ezinne Akudo Anyaoha, 32; the podcaster Jola Ayeye, 30; the writer Eghosa Imasuen, 46; and Adichie’s cousin the public servant Oge Ikemelu, 35.

The music: Songs by the Cavemen, Tems, Burna Boy and party guest Phyno were included in the mix.

The conversation: The attendees talked about TV series they were watching. “They made fun of me when I said I like Scandinavian noir,” says Adichie. “They told me, ‘Ooh, fancy.’” (The rest of the guests, she says, were partial to “Succession” [2018-present], though she hasn’t yet seen it.) Obi-Uchendu, who hosts the Nigerian iteration of the reality TV show “Big Brother,” told the group about an upcoming mash-up with the South African version, which they all agreed would be dramatic.

Favorite party game: “I force everyone to reveal a secret about themselves,” says Adichie. “And invariably I want it to be about their sex lives. It doesn’t always work. Usually, the first person says, ‘Oh, no, come on.’ Then the second person says, ‘Well, I did this once. …’ And suddenly everyone’s laughing.”

This interview has been edited and condensed.