Home » In Praise of Congee

In Praise of Congee 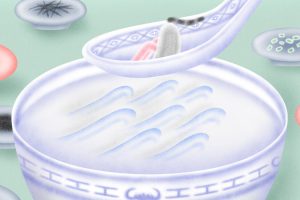 My rice cooker was cheaply made and cheaply bought, a squat device of rounded plastic and metal. I chose mine from the selection at H Mart because it had only two settings — cook and warm — and pastel flowers stamped across its curve. I found this flourish charming: My rice cooker tries. I try, too, because cooking is not one of my strengths. I’ve always approached it as a means to an end (dinner), which, because I am lacking in culinary skills, is only the means to another end (caloric intake).

One of the few meals I can make with confidence is congee, a kind of porridge commonly eaten as a breakfast food in many Asian countries. Congee is made of just rice and water and by itself is formidably bland. Bowls can act like sinkholes of flavor into which sauces and seasonings are absorbed and vanish. I have a childhood memory of myself, age 8, using up half a bottle of soy sauce to flavor a stubborn congee; I woke up the next morning, throat throbbing from the sodium. I now top my congee with side dishes. More traditional eaters usually reach for pickled vegetables and preserved eggs. My accessories are less orthodox, because I often buy them pre-prepared: I like kimchi, puffed tofu sopped in sesame oil and salty dashes of dried anchovies.

I spent my childhood in Hong Kong with my mother, while my father lived in China for the majority of his life and the entirety of mine. In both places, congee was ubiquitous but unremarkable, the kind of meal served as a stopgap against hunger. Because I have no memories of craving congee, I was surprised by the budding enjoyment I felt once I started making it. It is an easy, economical dish, but there’s also an alchemical thrill to the process. You combine two basic components and come back to some strange new matter: a substance with the unsettling feel of cud. I like this slight tinge of grossness, when a mouth must suddenly feel instead of just taste. There is comfort in each spoonful. Food for toddlers, food for baby birds.

I love the disgusting synonyms this kind of meal evokes — slop, gruel, goop — and their ogreish consonants. At its least flavorful, a pot of congee can recall the mysteries of cafeteria food or a mediocre buffet with those metal ladles you gingerly reach for. It is caldron food, in which finesse is sacrificed for the collective satiation of the maximum number of appetites. Now that the pandemic has changed the way we look at communal eating, making it impossible to share food without thinking of bacterial exchange or contagion, I feel nostalgic for this mushiness. Even when I make it solo, stirring my open rice cooker in my cramped kitchen, congee reminds me of what it was like to once eat freely, carelessly, with strangers.

I don’t put stock in many universals, but I do believe in the enduring combination of grain and water.

A college friend once told me that in Hawaii, his home state, people eat congee, which they call jook, a variation of its Cantonese name. Years later, when I became the sickest I’d ever been while living in Morocco, my host mother fed me — actually spooned into my mouth — rice in milk, boiled down to a sugared mush. Communities everywhere seem to each have their congee equivalent: porridge, grits, mazamorra. I don’t put stock in many universals, but I do believe in the enduring combination of grain and water. I believe in human ingenuity in the face of hunger. And I believe that most people have a certain yearning for formlessness, for food that looks the way they want to feel: gooey, warm and capable of seepage through existence’s most stringent boundaries.

Congee is my reminder that, under the hard surfaces, the stuff of life is mostly soft and indeterminate. What is paper but a temporary crisping of pulp? What is a footprint in concrete if not a testimony that our world is more impressionable than we think? Language is only gibberish, corralled into phonics. It may be ludicrous, but I want to lift up my bowl of congee and wax poetic. From mush we originate — to mush we’ll return.

Smuggled inside this universality is a small, burnished kernel of particularity, one I’m not sure how to hold. Congee for me will always evoke China and my family, though I am skeptical of that sentimental strain of Asian-American writing that seizes on food as the conduit to an authentic past. Because of the pandemic’s timing, it has been two years since I’ve seen my father, three since I’ve visited my extended family. I can’t pretend that any bowl of food compensates for this stolen time or that congee induces in me profound feelings of loss or longing.

It does offer something broader, more amorphous. When I eat congee, I feel the simple assurance of knowing that, at any point in time, tens of thousands might be partaking in the same nutritional staple as I am. Though I have felt the devastation of separation, I reject the ideal of a lost country. Someday I’ll return; in the meantime, life’s maintenance — survival, sustenance, caloric intake — goes on. It must happen here. It is happening there, too.

Zoë Hu is a Ph.D. student in English at the CUNY Graduate Center.