Home » Entertainment » In ‘Sleeping Beauty,’ the Hard Work of Being Princess (or Prince)

In ‘Sleeping Beauty,’ the Hard Work of Being Princess (or Prince)

On or off the stage, it makes no difference: Indiana Woodward possesses an unmistakable sparkle. But mastering the formidable role of Aurora — that fairy-tale princess whose finger is pricked by a needle, causing a kingdom to sleep for 100 years — has come close to dimming it. She won’t let it.

At a recent rehearsal for “The Sleeping Beauty,” Ms. Woodward and Anthony Huxley, her Prince Désiré, went over the details of the wedding grand pas de deux on the stage of the David H. Koch Theater where, on Thursday, they will make their debuts in the New York City Ballet production.

Ms. Woodward was having trouble with a sequence in which she curls around the stage in a circle. She couldn’t make her final pirouette stick. 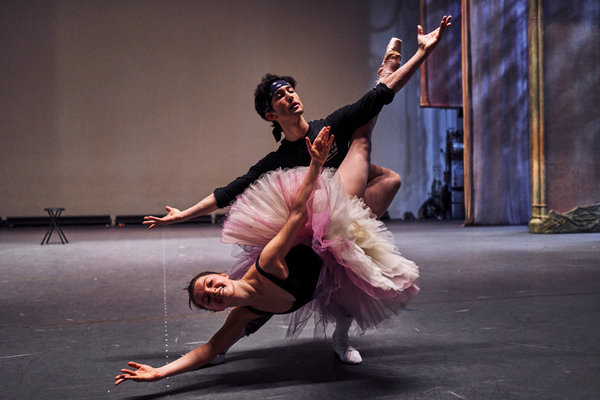 “I was starting to get angry,” she told Glenn Keenan, the ballet master working with Ms. Woodward and Mr. Huxley, during a rehearsal of another failed attempt. Her face was bright red.

Ms. Keenan said: “Get determined, not angry. Just know that you can do it.”

Even Mr. Huxley, a serious and soft-spoken 30-year-old principal, laughed. One of the most technically refined dancers in the company, Mr. Huxley said that Ms. Woodward reminded him of himself just a few years ago, when he rehearsed as if his life depended on it.

On a day of studio and stage rehearsals, as well as costume fittings under Ms. Keenan’s watchful eye, the dancers prepared for the ballet, which is especially difficult for the lead ballerina, who soon after her first entrance must dance the famous Rose Adagio, in which Aurora is courted by four suitors. It’s a marathon, featuring extended balances. In one sequence, the suitors each turn her in an attitude — a position in which her raised back leg is bent behind her; she stays on point throughout.

But Ms. Keenan, 36, is confident that her two principals are more than up to “Sleeping Beauty” and its challenges. “First off, they’re both phenomenal technicians — they can do anything,” she said. “And secondly, they are insanely hard workers.”

More important, though, is how well suited they are to their roles: Ms. Woodward because of her effervescence — “she’s so young and full of life, which is exactly what the character is” — and Mr. Huxley because of his quiet elegance: “When you first see him, you don’t really notice it,” Ms. Keenan said. “But he starts moving, and it truly is astonishing.”

The three of them — all under 40 — have become something of a team; it is the first time Ms. Keenan, a former company member, has worked with the leads in the ballet, which was choreographed by Peter Martins in 1991. For Ms. Woodward, their bond has made a difference.

“We are all in it together,” she said. “It feels like a community.”

For instance, those traveling turns she was having difficulty with earlier. Ms. Keenan always asks her, Ms. Woodward said, if she wants to redo that part. “I’m like, “Yes. Yes, I do.’ ”

Ms. Woodward paused for a moment. “I really don’t, because I don’t like it, but I’m going to tell myself that I love it,” she said and smiled brightly. “You just manifest it.”

Here are edited excerpts from interviews with the dancers and Ms. Keenan as they prepare for their big night.

WOODWARD It was the first ballet I was ever in a production of. It was with the Kirov in L.A., and I was one of the kids in the Garland Dance. I was probably 9 or 10. Classical ballets are the only things that I grew up with. Yuri Grigoriev, my teacher, always said he wanted me to do this part. He passed away three years ago, but his wife is coming to see me do it. I feel like he’ll be watching.

A prince (and his ponytail)

HUXLEY They told me beforehand that they wanted me to grow my hair out. They were like: “Don’t get a haircut. Just in case.” Then I saw my name on the schedule. You need longer hair for the ponytail. It’s fake, but you need something to pin it to.

HUXLEY For me [the difficult thing] always is the acting and being a presence onstage and not getting so into myself. Especially with these story ballets where you need to actually tell the story and not just dance, because I’m not a natural projector with my face. The Prince has to convey that he’s sort of sad and fed up with his life. In the pantomime, the Lilac Fairy asks, “Why are you crying?” I’m just trying to find a place where it may look like I’ve been crying but I don’t really know where.

WOODWARD As Glenn keeps explaining to me, throughout the Rose Adagio Aurora becomes more and more confident, and she is showing off to her suitors. I’m sure everybody has a different story that they tell themselves, but that’s the story that we’ve created together. The suitors are all rooting for you. They’re all like [Whispers]: “You can do it. You can do it.” I’m like, “Help.” Silas Farley [one of the suitors] is like: “Keep breathing. Keep breathing. Take a breath.” He was the one who explained to me that the steps are telling the story. It’s not just that the steps are commanding you.

Rising above the demons of self-doubt

WOODWARD Glenn keeps saying, “You can do it!” The only person that is doubting me is myself. I think it’s just because I’ve seen so many of my favorite ballerinas do it that I can’t believe I’m doing it. I guess there’s always that struggle of feeling like you’re not good enough. So I just have to get over that and become the character.

HUXLEY We always start the rehearsals just kind of talking about things: what happened at the last rehearsal, what we want to do and accomplish. The mood. In the wedding pas de deux, we talk about streamlining it and not adding too much extra fluff that we don’t need. Some people add things here and there. I think it’s beautiful, but we talk about trying to find our own version and it seems to be very simple and clean.

WOODWARD When I watch [the principal] Sara Mearns, I don’t feel like she ever doubts herself. She always steps out — she takes huge steps and it’s just so impressive and it always works. Sometimes you feel like it’s not going to happen because it’s so big and so exciting and then it happens. That’s what I’m trying to work on.

KEENAN She has a very soft, innocent quality, and he’s more angular in a lot of ways. I think it’s a perfect combination. They bring out certain things that the other person is missing in a sense, which is so beautiful to see. 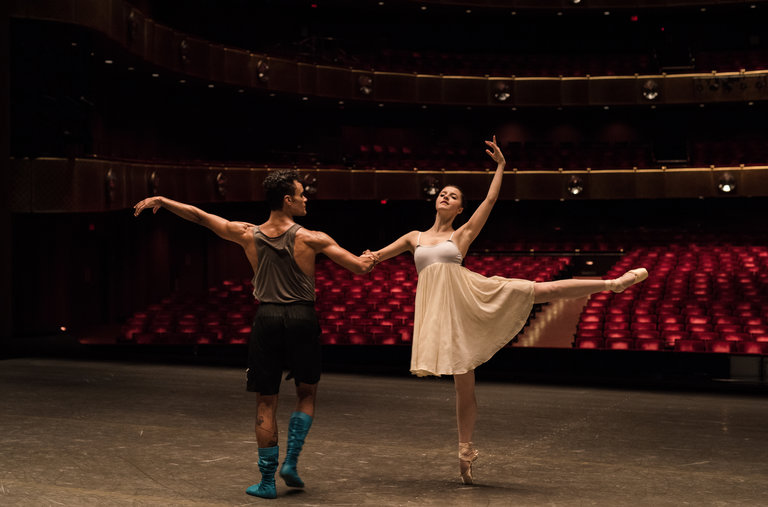 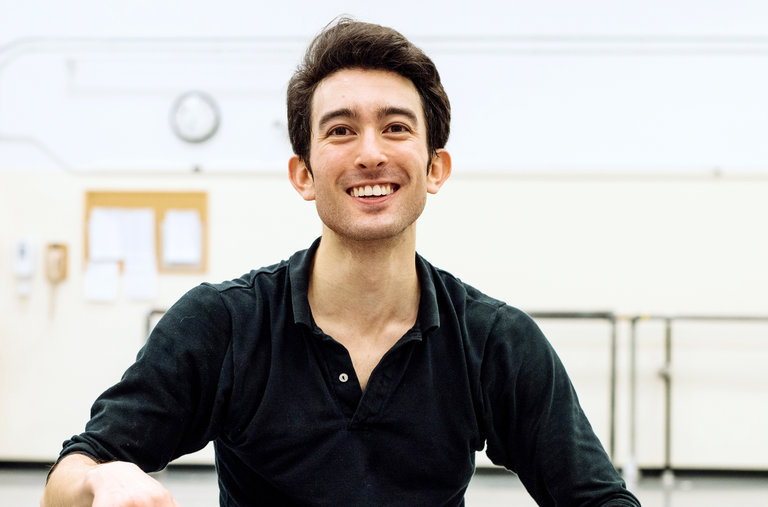 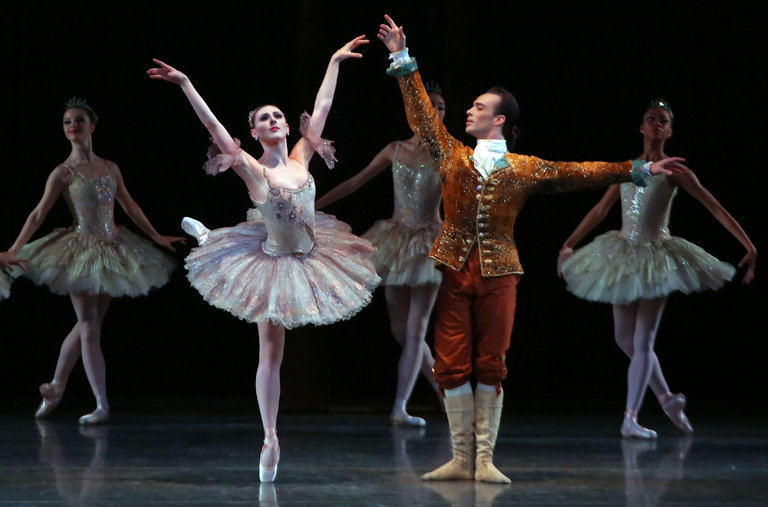