Inching Towards the End of the World with Jet Le Parti 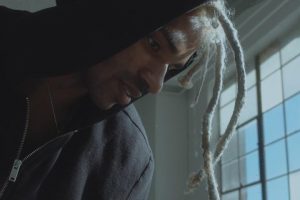 If art is a reflection of the creator’s soul, then the work of Jet Le Parti is a portal into a world of melancholy, dystopia and an unapologetic view on reality. Entirely self-taught, the New York-based artist works across mediums and explores topics pertaining phenomenology, theoretical sciences, historical analysis, hyperreality and existential thought.

“We’re in a time of alienation” said Le Parti in an interview with HypeArt, as he dragged a painted roll of canvas across en empty warehouse like a religious figure traversing a desert landscape. “We’re at the peak of technological advancement. Where it’s like our reality around us is being governed by algorithms and they’re becoming more affected every given second, every given interaction. There’s a disconnect in relation to the ethics and the philosophy of what it is doing. But in our culture, we don’t hold them, necessarily, accountable,” he added.

For the latest HypeArt Visits, Le Parti invited us into the massive studio space he’s been working from in Brooklyn called Base 36, as he presented a selection of paintings, such as the first installment in his new Melting Blues series. Viewed from a distance, Melting Blues appears as a largely abstracted blue painting with the softness of the sky — described by the artist as a “nuclear horizon.” Upon closer look, there are subtle details, such as the artist’s footprint, which alludes to the series’ emphasis on “what happens when you essentially wrap this threshold between moving towards technology in a trans-humanism way or succumbing to the instruments that have led us to the world we live in.”

Inspired by a range of disparate references, such as the history of techno to the American South where he was raised, many of Le Parti’s canvases are like diary entries or research logs, where he writes his thoughts amidst surreal characters and then covers his tracks by scribbling over them and leaving the viewer to piece together a blueprint into the artist’s mind.

Check out the film on Jet Le Parti in the gallery above and let us know your thoughts in the comments.