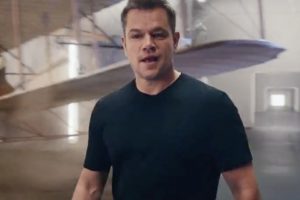 Matt Damon’s new commercial plugging cryptocurrency has been absolutely savaged on social media, with viewers dubbing it “insulting” and “disgusting”.

The Oscar-winning actor, 51, became the face of Crypto.com – a cryptocurrency exchange app – last year, and has appeared in his first ad for the Singapore-based company.

While the ad itself was released two months ago, it was screened at NFL games over the weekend where it clearly reached the masses, who took to Twitter to express their furore.

We see him deliver an inspirational monologue as he walks past Sir Edmund Hillary climbing Mt Everest, astronauts landing on the moon, and even a nod to the iconic Wright brothers’ first manned flight.

“And in these moments of truth, these men and women, these mere mortals – just like you and me – as they peer over the edge, they calm their minds and steel their nerves with four simple words that have been whispered by the intrepid since the time of the Romans: Fortune favours the brave,” Damon says as ‘Crypto.com’ flashes on screen.

It’s quite the stretch to link investing in crypto to some of the greatest achievements throughout history, and viewers certainly haven’t taken kindly to it with “Matt Damon” trending worldwide on Twitter.

While he’s enjoyed a squeaky clean career in the spotlight, this is the second time Damon has come under fire in the past year.

In an interview with The Sunday Times in August, Damon said he “retired the f-slur” just “months ago” after a dressing down from his daughter.

“The word that my daughter calls the ‘f-slur for a homosexual’ was commonly used when I was a kid, with a different application,” he told The Times.

“I made a joke, months ago, and got a treatise from my daughter. She left the table. I said, ‘Come on, that’s a joke! I say it in the movie Stuck on You,'” Damon added, referencing the 2003 film in which he plays a conjoined twin with Greg Kinnear.

“She went to her room and wrote a very long, beautiful treatise on how that word is dangerous. I said, ‘I retire the f-slur!’ I understood.”

Damon was forced to respond at the backlash, releasing a lengthy statement to Variety saying he doesn’t use “slurs of any kind”.

“I explained that that word was used constantly and casually and was even a line of dialogue in a movie of mine as recently as 2003; she in turn expressed incredulity that there could ever have been a time where that word was used unthinkingly.

“To my admiration and pride, she was extremely articulate about the extent to which that word would have been painful to someone in the LGBTQ+ community regardless of how culturally normalised it was. I not only agreed with her but thrilled at her passion, values and desire for social justice.”

Cryptocurrency is a digital or virtual currency that is secured by cryptography, which makes it nearly impossible to counterfeit or double-spend.

Cryptocurrencies are generally not issued by any central authority, rendering them theoretically immune to government interference or manipulation, according to Investopedia.