Home » Entertainment » It's A Wrap: the Nike SB Dunk Low "Mummy" Might Be this Year's Best Halloween Sneaker

It's A Wrap: the Nike SB Dunk Low "Mummy" Might Be this Year's Best Halloween Sneaker 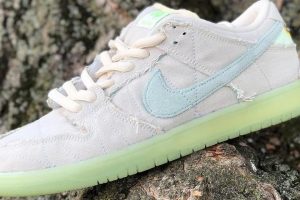 Uppers are wrapped in a rough-hewn, soft-toned gray fabric, a nod to the gauze mummies are shrouded in. Suede Swooshes take on a light blue shade, and the tongue’s Nike SB branding is done up in a Goosebumps-esque dripping green font. Though it’s hard to tell with utter certainty from the set of leaked images above, the heel appears to feature tear-away detailing — a potential indication, along with the upper’s criss-crossing stitching, that there’s a hidden layer underneath this low-cut SB Dunk‘s fabric folds. Insoles with a spooky pattern and glowing green midsoles/outsoles complete the look.

There’s currently no release date or pricing information for the Nike SB Dunk Low “Mummy.” However, as it’s a Halloween-themed release it’ll likely rise from the dead this October.

Elsewhere in the world of footwear check out the latest installment of HYPEBEAST‘s Sole Mates series, in which fine artist and designer Ju Working on Projects discusses the Nike Sky Force.
Source: Read Full Article