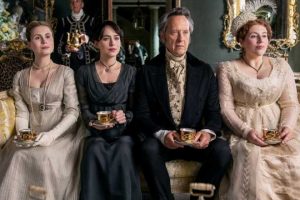 From the starry adaptation of Jane Austen’s Persuasion and the final episodes of Stranger Things season 4 to the long-awaited Hollywood blockbuster The Gray Man, these are the best new films and TV shows landing on Netflix in July 2022.

If there was ever a month that we could say with certainty has all the content we’ve been impatiently waiting to see on our TV screens, Netflix’s July lineup is definitely it.

It’s not hyperbole: this month, the streamer’s summer schedule has gone the extra mile with fan favourite TV shows, jaw-dropping documentaries and big budget films that will make you seriously consider cancelling your plans and having a hot date with your TV instead.

Trending on Netflix UK June 2022: all the best TV shows and films you need to have on your radar

July kicks off with the last two episodes of the epic fourth season of Stranger Things, which is just about as good a start to the month as we could possibly hope for.

Anything else? Oh yes: The Gray Man, one of its most high profile movies to hit the streaming platform to date. With a rumoured £200 million budget and an A-list cast that features the likes of Ryan Gosling, Chris Evans, Ana De Armas and Regé-Jean Page, it certainly qualifies as one of the most anticipated movie exclusives we’ve seen in recent times.

Without further ado, let’s take a detailed look at what’s coming to Netflix in July 2022.

Please note that this article will be updated regularly as more films and TV shows are announced.

We can barely contain our excitement for the epic season finale of Stranger Things season 4. After all the heart-pounding adventures in the first volume of the fourth instalment of the sci-fi horror, Stranger Things returns with two feature-length episodes to round off the latest run.

In the final two episodes of the fourth outing, the storylines revolve around the threat from the Upside Down, Eleven’s attempts to regain her powers and Hopper’s incarceration in a Russian gulag.

Even better, Netflix has confirmed that Stranger Things will conclude with a fifth and final season. Until that day arrives, we’ll be listening to Kate Bush’s Running Up That Hill on repeat.

Netflix’s How To Build A Sex Room

You’ve seen kitchen renovations, you’ve seen bathroom transformations, but you’ve never seen anything quite like this.

In this eye-popping new series, couples looking for more spice in the bedroom hire luxury interior designer Melanie Rose to create stylish spaces where they can carry out any fantasy they wish.

Netflix’s newest original crime series is sure to have you on the edge of your seat as chaos, action and mystery seize the prison of Monte Baruca.

The Longest Night follows a group of armed men who surround the Monte Baruca psychiatric prison and cut off communications with the outside on the night of 24 December. Their objective: capture Simón Lago, a dangerous serial killer. If the guards hand him over, the assault will be over in a matter of minutes. But the prison warden Hugo refuses to obey and prepares to resist the attack, triggering a nail-biting countdown.

“Célène, at 17, is idealistic,” reads the synopsis. “She believes in absolute love, and is more interested in reading than in social networks. She is getting ready for living apart from her fiancé, Pierre, for a while, leaving Paris for Biarritz.

“Very quickly, she has to face the evil elite of her new school, ruled over by the former big-screen star and Instagram queen Vanessa and the celebrity surfer Tristan, who’s both dangerous and seductive. Célène falls in love with him, but is a long way from suspecting that she is at the centre of a cruel bet between Tristan and Vanessa. Just how far will they go?”

One of the most intriguing documentaries of the month is undoubtedly How To Change Your Mind, which delves deep into the history and usage of psychedelic drugs.

Why? Because these substances have the extraordinary potential to heal and change minds. Presented by Michael Pollan, whose authored the New York Times bestselling novel of the same name, this new docuseries focuses on four different mind-altering substances as it explores the radical new psychedelic renaissance.

In November 1971, a skyjacker parachuted off a Northwest Airlines passenger jet with $200,000, never to be seen again. Fifty years later, his identity still remains a compelling mystery.

Now, new series DB Cooper: Where Are You?! connects the dots in the one of the stupefying mysteries of the 20th century.

In the year 2036, 14 years after the spread of the drug Joy unleashed a viral outbreak and caused a global apocalypse, Jade Wesker fights for survival in a world overrun by the bloodthirsty infected and mind-shattering creatures. Haunted by her past in New Raccoon City, her father’s chilling connections to the sinister Umbrella Corporation but mostly by what happened to her sister, Billie, she vows to bring down those responsible.

This thrilling new Korean drama follows the goings-on at an exclusive matchmaking agency where women are given the chance to marry the most desirable bachelors in society.

One ultrarich divorcee isn’t after love, though, but revenge against her ex-husband’s scheming mistress.

The trailer sparked plenty of controversy when it landed earlier in June, and now the countdown is well and truly on for Netflix’s much-anticipated adaptation of Jane Austen’s classic novel.

Starring Dakota Johnson, the movie follows Anne Elliot, a woman of modern sensibilities who is living with her snobby family on the brink of bankruptcy. When Frederick Wentworth — the dashing suitor she once sent away — crashes back into her life, Anne must choose between putting the past behind her or listening to her heart when it comes to second chances.

Despite not knowing whether her baby belongs to her deceased husband, Mark or Jack, nurse practitioner Mel begins season four of the romantic drama with a sense of optimism. For years she yearned to be a mother and her dream is one step closer to reality. While Jack is supportive and excited, the question of paternity continues to gnaw at him.

Based on the novel The Gray Man by Mark Greaney, Netflix’s rumoured £200 million dollar production sees all the Hollywood talent lined up for a thrilling manhunt.

The movie follows the CIA’s most skilled operative Court Gentry (Ryan Gosling), aka Sierra Six, who suddenly finds himself as the target after accidentally uncovers dark agency secrets. Hunted across the globe by psychopathic former colleague Lloyd Hansen (Chris Evans) and a cabal of deadly international agents, the odds of survival are stacked against him. Good thing he has agent Dani Miranda (Ana de Armas) on his side.

Blown Away is back for season three with some of the glass world’s heaviest hitters, all competing for the title, Best In Glass. Ten glass artists have come to North America’s largest hot shop to push themselves to their creative limits. In each episode, the glassblowers must impress the evaluators or risk being eliminated. At stake is a life changing prize that will send their careers to new heights.

The Most Hated Man On The Internet – 27 July

Hell hath no fury like a mother whose daughter is violated online.

Neil Patrick Harris is making his long-awaited return to TV next month in this heartwarming new romantic sitcom from Sex And The City creator Darren Star.

The series follows Michael (Patrick Harris) who thought his life was perfect until his husband blindsides him by walking out the door after 17 years. Overnight, Michael has to confront two nightmares — losing what he thought was his soulmate and suddenly finding himself a single gay man in his mid-forties in New York City. As he quickly discovers though, while breakups suck, single life doesn’t have to.

In spite of their many differences, Cassie (Sofia Carson), a struggling singer-songwriter, and Luke (Nicholas Galitzine), a marine with a troubled past, agree to marry solely for military benefits. But when tragedy strikes, the line between real and pretend begins to blur.