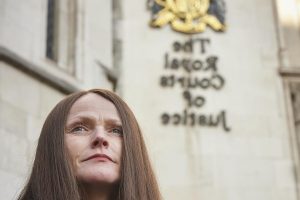 The Hillsborough Disaster is one of Britain’s most infamous tragedies. Now, a new ITV drama, Anne, starring Maxine Peake will shine a light on the woman who headed the fight for victims’ justice.

On 15 April 1989, an FA Cup semi-final between Liverpool and Nottingham Forest played at Hillsborough turned into one of the most infamous British tragedies after a fatal human crush caused by overcrowded pens killed 96 football fans and injured 766.

Now, Shameless and Three Girls star Maxine Peake will play Anne Williams, a mother who dedicated her life to campaigning as chair of the The Hillsborough Justice Campaign after her 15-year-old son Kevin’s tragic death during the disaster, in ITV’s new drama, Anne.

Produced by award-winning programme makers, World Productions, who gave us Line of Duty and Vigil, the four-part mini-series, airing in 2022, will explore the decades-long fight to “demand for justice for those who died at Hillsborough and those survivors who continue to suffer.”

As ITV’s official synopsis reads: “Refusing to accept the Coroner’s original verdict of accidental death, Anne was determined to unearth the truth about what happened at Hillsborough. She sought out new medical opinions, tracked down witnesses who had tried to revive Kevin on the pitch and lobbied ministers for new inquests.

The Long Call: add ITV’s gripping new detective drama, from the producer of Vigil, to your autumn watchlist

At times to the cost of her own family and health, Anne stood defiant for over 20 years alongside the parents and relatives who fought to prove that their loved ones had been unlawfully killed at a football match.”

Speaking about her role as Williams, Peake commented: “Anne Williams was an extraordinary woman who spent half her life campaigning for the truth of her son’s death and the other 95 victims who were unlawfully killed at Hillsborough. Anne and her family’s story really is inspirational. She was a magnificent role model. Her fearlessness and drive to take on the British Establishment is mind blowing.

I hope we can go some way to bringing the story of Anne, the families, victims and survivors of Hillsborough to an even wider audience.”

The true story behind Anne

The Hillsborough Disaster of 1989 was the result of negligence by the South Yorkshire Police at a football match at Hillsborough Stadium between Liverpool and Nottingham Forest led to overcrowding in two central pens. In the crush, several hundred Liverpool fans were injured and 94 died on the day, with three more people subsequently dying from their injuries. The 97th victim, Andrew Devine, died in July 2021, 32 years after being hurt at the semi-final.

Days after the incident, The Sun published a front page story with the headline “The Truth” containing a number of falsehoods alleging that Liverpool supporters were responsible for the accident, including that they had picked the pockets of victims and beaten up police officers assisting at the scene.

Many other outlets ran similar stories blaming the fans for the disaster. The Taylor report of 1990 concluded that policing on the day “broke down” and “the main reason for the disaster was the failure of police control.”

It dismissed the claim by South Yorkshire Police that fans attempting to gain entry without tickets or with forged tickets contributed to the disaster, describing the senior officers in command as “defensive and evasive witnesses” who refused to accept any responsibility for error.

A memorial commemorating the 96 at Liverpool’s Anfield stadium

The report also found that police, seeking to rationalise their loss of control, overestimated the element of drunkenness in the crowd and that the behaviour of fans were “exercerbating” but “secondary” factors.

In 2016, following a second inquest, a jury found thatthe 96 men, women and children who were killed on the football terraces in 1989 were unlawfully killed. And crucially, that they were not responsible for their own deaths.

Anne Williams dedicated her life to the Hillsborough justice campaign

Anne Williams chaired the Hillsborough Justice Campaign from 1998 until 2006, when she sought to pursue her son’s legal case independently.

She passed away in 2013, just three days after the truth about the disaster was finally exposed with the report of the Hillsborough independent panel, confirming the facts she had known all along and refused to see denied.

When will Anne be available to watch?

Anne will air at some point in 2022, but we will keep you updated with any official release dates.