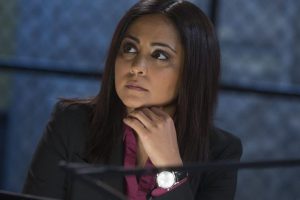 DI Ray – the ITV’s tense new series from Line Of Duty’s Maya Sondhi and Jed Mercurio – promises to “send viewers on a thrilling ride through the murky underworld of Birmingham”.

All we want to do at the moment, quite frankly, is bundle ourselves up in blankets and sink our teeth into a new crime thriller – especially now that there’s a Vigil-shaped hole in our TV schedules.

Thankfully, ITV has heard our cries and commissioned a new four-part detective drama from Line Of Duty actor and screenwriter Maya Sondhi.

And, as if that weren’t enough to tempt you in, it’s being executive produced by Jed Mercurio himself, no less.

Here’s what you need to know, then, about DI Ray.

What’s the plot of DI Ray?

Set in Birmingham, DI Ray introduces us to Leicester-born Rachita Ray, a police officer who achieves the promotion she’s long been dreaming of when she’s asked to join a homicide investigation.

“On her first day, though, she’s told the murder to which she’s been assigned is a ‘Culturally Specific Homicide,’” continues the official synopsis, explaining that the revelation causes Rachita to fear that she’s nothing more than a “token appointment”.

Unwilling to give up her dream job, Rachita makes it her mission to solve the murder, delving deep into the dangerous world of organised crime to do so. But she has more on her mind than just finding the killer; she’s determinedto call out the obvious biases her colleagues are bringing to the investigation, too.

“What she doesn’t count on is what this case stirs up inside her; the realisation that she’s been burying a personal identity crisis her whole life,” adds the synopsis.

Who stars in DI Ray?

The internationally renowned Parminder Nagra – as in, yes, star of Bend It Like Beckham, ER and The Blacklist – will be stepping into Rachita’s shoes for this one.

“I am so looking forward to getting back to the UK after such a challenging time globally to be part of this exciting new project,” says Nagra.

“We are being helmed by an amazing team to bring something special to our storytelling landscape.”

No other casting announcements have been made at this time.

What are people saying about DI Ray?

“This is a project which is deeply personal for me as a British Asian Brummie woman,” says Sondhi of her upcoming show.

“It’s only in the past 10 years or so I’ve really been able to truly embrace my heritage.So much of this show is my story and in telling it honestly, I hope others from all different backgrounds will relate.”

Autumn TV: 30 brilliant new TV shows to get stuck into this season

Mercurio, meanwhile, adds: “Everyone at HTM Television is thrilled to be collaborating with writer Maya Sondhi, director Alex Pillai and star Parminder Nagra on such a thought-provoking series.

“DI Rayis first and foremost a thriller, while Maya’s writing poses complex and timely questions about the nature of personal ethnic identity.”

Who is working behind-the-scenes on DI Ray?

The four-part drama will be directed by Bridgerton’s Alex Pillai and produced by Code 404’s Charlotte Surtees.

DI Ray is so much more than a classic murder mystery

It has been commissioned for ITV by the broadcaster’s head of drama, Polly Hill, who says: “Maya’s script is brilliant.It’s funny, relevant and introduces the fabulous DI Ray, played by the equally fabulous Parminder Nagra. It’s always hard to find a fresh detective, but it feels we have this with Rachita Ray, in a thriller that will keep the audience captivated till the end.”

Why is DI Ray worth watching?

This is a crime thriller, first and foremost, but everyone involved in the making of DI Ray has promised that it is so much more than a classic murder mystery. Because, as well as a healthy dollop of whodunnit fun, it is also set to explore the emotive subject of racism in the workplace, asking difficult questions about what it’s like to be British but feel ‘other’ all the while.

When can we watch DI Ray?

DI Ray will be filmed in the Midlands during the autumn of 2021, so it’s unlikely to hit our TV screens until the spring of 2022 at the very earliest.

We will be sure to bring you more details as and when ITV makes them available.