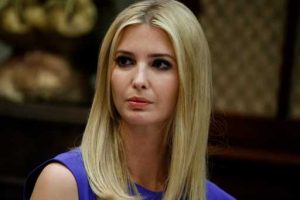 The Trump family was everywhere this weekend with Donald and Melania Trump attending the fourth game of the World Series and Ivanka Trump celebrating her 40th birthday in Miami. After a very quiet year, the mom-of-three is stepping back into the spotlight.

She’s been laying pretty low since she left Washington, D.C. in January, which has allowed her time to get her three kids with husband Jared Kushner, daughter Arabella 10, and sons Joseph, 8, and Theodore, 5, settled into their new surroundings. But it looks like that quiet time is over as several of her friends flew to Florida to enjoy a five-star weekend. According to Page Six, the group enjoyed cocktails and dinner at the Four Seasons and then hit one of Miami’s trendiest clubs to get their groove on.  Kushner even stopped by to cozy up for a photo with his wife during dinner. (See the photos HERE.)

“It was two days of boating, beaches and bubbly… There were champagne toasts, cake and caviar,” a Trump insider described the weekend. “It was an all-girls’ affair — with girlfriends from New York and Miami.” And it seems like Ivanka might be using her 40th birthday as her reemergence into the society scene in her new home base. “They’re loving it down there. It really suits them,” the source added.

It will be fascinating to watch how Ivanka and Kushner navigate their public image, especially since he has a book about his time in the White House being published in the near future. Florida is enjoying their presence, but will the couple ever be welcomed back into their former New York City social circles? Only time will tell.