'Jackass Forever' Celebrates a Legacy of Excruciating Stunts and Brotherhood 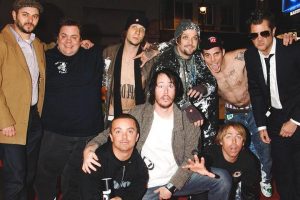 Paramount Pictures has dropped off the first official trailer of Jackass Forever.

The fourth film in Johnny Knoxville, Spike Jonze and Jeff Tremaine’s franchise, the trailer offers a peek at both the new and classic stunts the group will be pulling off, including being shot out of a cannon, getting slapped by a giant hand, fighting with a bull and receiving injuries. Jackaass Forever will feature the return of almost all of the original cast members including Knoxville, Steve-O, Jason “Wee Man” Acuña, Chris Pontius, Dave England, Ehren McGhehey and Preston Lacy, along with new additions Sean “Poopies” McInerney, Odd Future‘s Jasper Dolphin and Zach Holmes. Guests like Eric André, Chris Raab and Tony Hawk are also set to appear.

The upcoming movie will mark the Jackass crew’s first full-length effort in 11 years, and is also the first without the late Ryan Dunn and Rip Taylor. Bam Margera will also not be involved as he was fired from the film in February this year.

Earlier this May, Knoxville confirmed that Jackass Forever will be his last contribution to the franchise. The stunt performer turned 50 years old this year and cited his luck and health as the reasons for his departure. “You can only take so many chances before something irreversible happens,” he said. “I feel like I’ve been extremely lucky to take the chances I’ve taken and still be walking around”.