James Corden razzed Amazon on Tuesday for the anticlimactic news that it would set up new headquarters in New York and the Washington metro area.

After a long decision-making process that saw cities across the United States vying for Amazon’s selection, the tech giant announced that it was going with two of the most obvious options.

“After a yearlong search that drew interest from hundreds of cities across the country, Amazon has announced the location of their brand-new second headquarters will be split between New York City and Northern Virginia. And I gotta say, I really think this could be the thing that finally puts New York on the map.” — JAMES CORDEN

“Amazon was just going to go with New York, but then at the bottom of the page they saw: ‘People who buy New York also buy Northern Virginia,’ and they were like, ‘Yeah, why not?’” — JAMES CORDEN

Stephen Colbert welcomed the news that Kyrsten Sinema, a Democrat, had won the Arizona Senate race. But he poked fun at the senator-elect for her reputation as a pragmatist and a centrist.

‘What Were These Kids Even Thinking?’

Trevor Noah showed a picture of a group of high-school boys in Wisconsin that made headlines after circulating on social media. In the photo, taken earlier this year before a high school prom, almost every one of the more than 60 boys is shown giving what appears to be a Nazi salute.

“First of all, congratulations to that one kid. Second, yes, this is where we are in 2018: We’re congratulating a kid for not being a Nazi.” — TREVOR NOAH

“What were these kids even thinking? They had to know that the photo was going to get out — and there aren’t enough jobs in the Trump administration for all of them.” — TREVOR NOAH

“Health inspectors will give New York street food vendors letter grades, so if you see a streetcar with the letters A, B or C, that’s just the type of hepatitis you’ll get.” — JIMMY FALLON, discussing a new citywide policy

“CNN has filed a lawsuit against President Trump after the White House suspended reporter Jim Acosta’s press pass. Really? You want to go after Trump with a lawsuit? That guy lives for lawsuits! He’s been served more than the Big Mac. Trying to sue him is like trying to drown a fish.” — SETH MEYERS

Jimmy Kimmel turned 51 on Tuesday. A random Seattle woman has been holding a party to celebrate Kimmel’s big day for years. She’s not really a fan — she just needed an excuse to party one day, and an annual tradition was born.

Wherein Seth Meyers gets some “alternative” answers out of President Trump:

Melissa McCarthy and Mark Wahlberg will both join Corden on “The Late Late Show” on Wednesday. 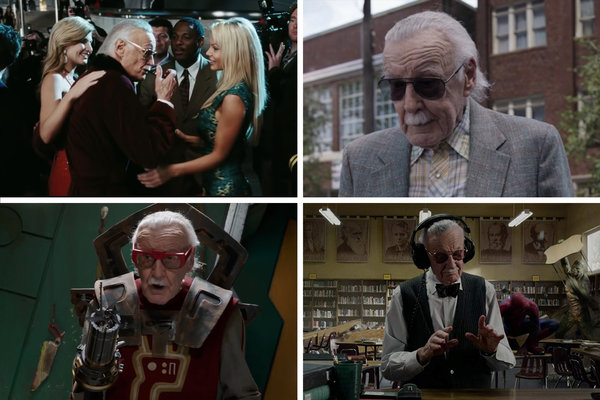 Stan Lee had cameos in each of the Marvel Cinematic Universe’s 20 films since 2008. Here’s a look at the best ones.