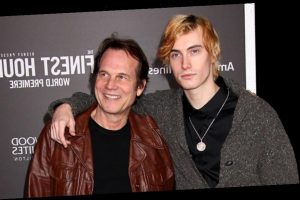 Filling in for dad. James Paxton made his debut on Marvel’s Agents of S.H.I.E.L.D. during the Wednesday, July 29, episode titled “Stolen.”

The 10th episode of season 7 takes place in the past, which made him the perfect person to play the young John Garrett. His father, the late Bill Paxton, portrayed the character in six episodes in 2014. James, 26, will return for another episode later this season as well.

“We’ve had a couple of people that I really loved working with who are no longer with us, Bill Paxton,” the Iron Man actor, 58, told ComicBook.com. “I really wished to have more time with him. I don’t know. It’d be really amazing if there was some way to feel like we had the spirit of Bill Paxton with us. Maybe that’ll happen this season.”

The Titanic star died in 2017 at age 61 after suffering a stroke while having a procedure done for an aortic aneurysm. James, 26, has paid tribute to his father multiple times since his death, posting a slew of photos on social media.

“I’ll love you forever, Dad,” he wrote via Instagram the month after Bill’s death next to a photo of the pair when he was a baby. “Could never possibly put into words how I feel about you.”

In 2016, the Eyewitness star revealed the advice his father gave him about the industry.

“He never discouraged me from the business, but kind of warned me and said, ‘You know, you might want to reconsider. It’s a hard, hard life and a hard business to crack,’” James told Entertainment Weekly at the time. “He always knew I could do it. But he couldn’t believe it at first. He was so over the moon. It was such a great feeling, I almost cried. I hate to get emotional, but it was almost my way of telling him, ‘I could do this. You don’t have to worry about me. I can do this on my own.’”