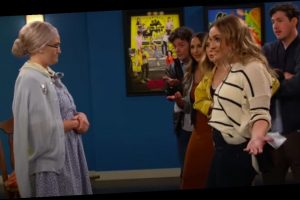 The cast of Zoey 101 is back together again! For an upcoming episode of Nickelodeon’s All That reboot, the stars of the hit show — Paul Butcher, Sean Flynn, Kristin Herrera, Chris Massey, Erin Sanders, and Matthew Underwood — reunite for a sketch. Of course, it wouldn’t be a Zoey 101 reunion without Zoey herself, Jamie Lynn Spears. In a sneak peek of the episode, Spears plays herself and her old All That character Thelma Stump.

Zoey 101 first premiered on Nickelodeon in 2005, and ran for four seasons before its cancelation in 2007. In July 2019, the cast sparked reunion rumors when they got together for a special dinner, and they confirmed the reunion later that year when they snapped a photo on the All That set. We’ve definitely missed the students of Pacific Coast Academy! Now if only Nickelodeon would make the show streamable on Netflix. Watch the nostalgic clip above before the sketch airs on July 11.