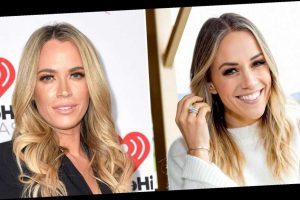 Is reality TV in Jana Kramer‘s future? It’s definitely a possibility. In July 2020, the actress, 37, revealed that she and husband Mike Caussin had “auditioned” for The Real Housewives of Beverly Hills. However, she never heard back.

Jana Kramer and Mike Caussin: A Timeline of Their Highs and Lows

“I never heard anything. I mean, once Teddi [Mellencamp] got let go, that was pretty much [it], because I was going to come on as her friend,” the One Tree Hill alum told Us Weekly exclusively on Monday, January 11, while promoting her One Brick wine brand’s launch said. “I feel so bad for Teddi because I love Teddi. I didn’t know all the drama that went down but I do love her.”

“I don’t want to bore you but I figured I got to give you a little update on what’s going on. I recently found out that my contract as a Housewife is not being renewed. I could give you the standard response of ‘Oh, we both came to the decision that it would be best …’ Nah, I’m not gonna do that. That’s not who I am,” she later revealed via Instagram after rumors that she was fired from the show. “Of course, when I got the news I was sad. It feels like a breakup almost because you develop such strong relationships with the cast, with the crew, and you get to do incredible things that you probably never get to experience without, you know, the show.

Former ‘Real Housewives of Beverly Hills’ Stars: Where Are They Now?

She noted, “That being said, I’m really looking forward to the future and being able to focus on my family, my friends, All In.”

Although Kramer wasn’t chosen to be part of the Housewives franchise, she admitted to Us that it’s probably a good thing. “I would get swallowed up alive on one of those shows. I care too much about what people think. It would be bad,” the Good Fight author said. “I wasn’t a sorority girl for a reason, so I don’t think I could ever do it.”

The Biggest ‘Real Housewives’ Fights Ever: A Definitive Ranking

That said, the “I Got the Boy” singer would be up for doing “a docuseries” with her family. The musician shares daughter Jolie, 4, and son Jace, 2, with her husband, 33, and they have actually talked about doing their own show. “We put a sizzle together about a year ago,” she told Us. “We’ll see. No bites yet, but we have definitely talked about it.”

END_OF_DOCUMENT_TOKEN_TO_BE_REPLACED

Melissa Gilbert and Shannen Doherty both started acting at a young age. In 1974, Gilbert became the star of Little House on the Prairie as […]

END_OF_DOCUMENT_TOKEN_TO_BE_REPLACED

END_OF_DOCUMENT_TOKEN_TO_BE_REPLACED
We and our partners use cookies on this site to improve our service, perform analytics, personalize advertising, measure advertising performance, and remember website preferences.Ok