“The Noh is unquestionably one of the great arts of the world,” the poet Ezra Pound wrote in 1916, “and it is quite possibly one of the most recondite.”

And, now, the composer Kaija Saariaho and the director Peter Sellars. Their most recent collaboration, “Only the Sound Remains,” an operatic reinterpretation of Pound’s translation of two Noh plays, arrives for its American premiere in Lincoln Center’s White Light Festival, on Nov. 17 and 18.

It will be a homecoming of sorts. Ms. Saariaho first discovered Pound’s poetry in an apartment she sublet during a Carnegie Hall residency in 2012. Two years later, she composed a large part of the opera in the city.

“Pound’s language is very fresh and surprising because, in fact, he didn’t speak Japanese,” she said in an interview. “It’s his interpretation of those stories. And the way he is describing the natural elements and the light, and has words like ‘color-smell’ — it all has directly to do with my music.”

Both of the one-acts that make up the work — “Always Strong” (originally “Tsunemasa”) and “Feather Mantle” (originally “Hagoromo”) — dramatize encounters with the invisible world. In “Always Strong,” a priest summons the unhappy spirit of a young lute player and performs a religious service using the ghost’s instrument. “Feather Mantle” depicts a fisherman’s argument and eventual reconciliation with a tennin, or angel, whose robe he has found and intends to keep.

Ms. Saariaho has conjured luminescent sonorities and ethereal textures from an ensemble of flute, string quartet, percussion and kantele — a type of Finnish zither akin to the Japanese koto, its inclusion inspired by Pound’s evocative description of the lute in “Always Strong.”

“The bass strings are something like rain; the small strings talk like a whisper,” a vocal quartet sings delicately above trilling strings and piccolo, while the kantele creates a resonant cascade of sound. The bass-baritone Davóne Tines represents the human roles; the countertenor Philippe Jaroussky, supernatural ones. In “Feather Mantle,” real-time electronic manipulation spins out the angel’s voice into reverberating crystalline shards.

Ms. Saariaho and Mr. Sellars have collaborated for years, but their turn to Noh was not an obvious choice. Although Mr. Sellars had staged “Hagoromo” in the 1980s, and Ms. Saariaho set two of Pound’s austere “Cantos” in her chamber piece “Sombre,” their earlier stage works, like “L’Amour de Loin” and “La Passion de Simone,” focused on women.

As they searched for a new subject, though, Ms. Saariaho was looking for something entirely different, something suitable for an intimate chamber ensemble with electronics. “Something like a fairy tale or traditional story,” she said. Mr. Sellars proposed Indian texts; Ms. Saariaho felt they didn’t resonate with her music. But when they arrived at Pound’s Noh translations, it felt like a match. 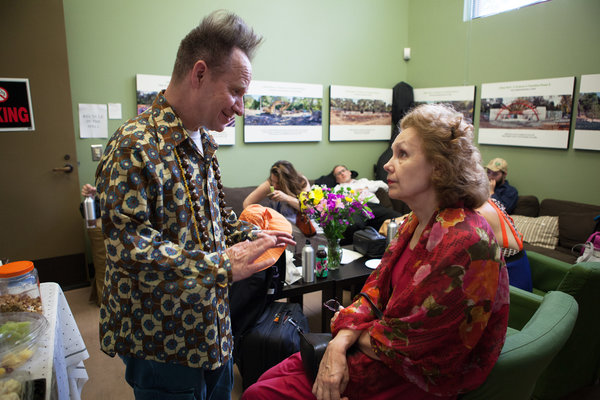 Pound’s translations also came about through collaboration. In 1913, he acquired a cache of the papers of Ernest Fenollosa, an American expatriate who had undertaken a prolonged study of Noh as an academic in Tokyo. Pound worked alongside W.B. Yeats as he refined Fenollosa’s rough, often fragmentary translations.

What Pound discovered in Noh echoed of his own developing Imagist aesthetic: suggestiveness, allusion, the static intensification of a single image that unifies each play. (Red maple leaves and a snow flurry. Pine trees. A heavenly mantle of feathers.)

What he missed was the plays’ religious subtleties, their references to Buddhism and Shintoism. Critics and scholars faulted him for misunderstandings, inaccuracies and omissions. Despite these flaws, Mr. Sellars sees Pound’s work and the broader artistic ferment of early-20th-century modernism as transformative.

“Pound and Yeats are inventing 20th-century theater in the process of total cultural misunderstanding,” he said in an interview. “Strangely, their getting it wrong is the way to some kind of new right.”

Both he and Ms. Saariaho emphasize that their touchstone is as much Pound as Noh, if not more so. “We’re not in any way imitating Japanese Noh performance,” Mr. Sellars said. “We’re recontextualizing it in the modern sense that Pound’s translation is, to use his beautiful phrase, ‘a film of a dream.’”

Absent the masks, gestures and other resources of traditional Noh, however, the piece poses a challenge for performers and audiences. “If you think about the classic Noh plays,” Ms. Saariaho said, “there is not so much going on onstage.”

This is ideal for Ms. Saariaho’s translucent music, said Susan McClary, the musicologist and author of the coming book “The Passions of Peter Sellars: Staging the Music.”

“The motions on the stage are very slow and don’t really shape up into plot,” Ms. McClary said. “So you’re thrown back on the music. If you can give yourself over to that music, it is a magical experience of the kind that the mortals are having in the opera.”

After its premiere in Amsterdam, in 2016, Mr. Sellars revised and reshaped his production. The piece finally settled, he said, during a run in Paris. “The ghosts of the Palais Garnier were with us,” he recalled of the city’s ornate opera house. “You could feel Stravinsky and Massine and Benois and Picasso and all those people in the room with us. To perform this music in that place on a bare stage with the ghosts was overwhelming.”

This interaction of humans and ghosts points to what Ms. McClary has identified as a unifying element of Mr. Sellars’s career. “All of Peter’s work,” she said, “shows an interest in this mystical experience of divine love, where there can be this direct encounter between the mortal and the spirit world.”

In “Feather Mantle,” the encounter culminates with the angel, sung by Mr. Jaroussky but danced by Nora Kimball-Mentzos, teaching the fisherman a dance meant to alleviate humanity’s sorrows in exchange for her cloak’s return. This conclusion, Mr. Sellars suggested, has a special resonance now.

“In a period where the world is in such an extreme state of anger, hurt and absence of tenderness,” he said, “what does it mean to end a piece with a protracted experience of joy?”

Only the Sound Remains
Nov. 17 and 18 at the Rose Theater at Jazz at Lincoln Center, Manhattan; lincolncenter.org.