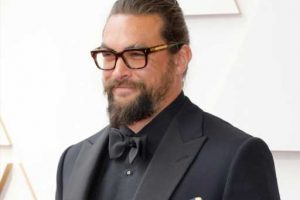 If you thought Jason Momoa was limiting his new look to a simple haircut, you thought wrong. The Hawaiian movie star shocked his fans earlier this month by posting a video reveal of his newly-shaved head as a statement of “new beginnings,” urging people to eliminate single-use plastics in an effort to be more committed to protecting our land and seas.

Opting to leave his signature locks long at the top of his head while shearing the sides, Momoa took to Instagram again today to reveal his completed look. With a leather bowler hat covering the majority of his head, the actor teased “I’ve got something special for you” before removing the hat to reveal his hair tied back in a bun and a new tribal tattoo running the length of the side of his scalp to the nape of his neck.

The Hawaiian native’s new tattoo is inspired by his heritage and continued desire to raise awareness for more ethical environmental action. He asked his followers to “help stop single use plastic” and called the tattoo experience a “powerful moment in my life” in another Instagram post.

It somehow felt like Momoa couldn’t possibly get hotter, but with his new head tattoo, he’s accomplished the feat. Honor his parting with his beloved tresses by fulfilling his request to use a canteen or aluminum bottle alternative rather than the plastic that’s wreaking havoc on our planet.

Before you go, click here to see some of the most dramatic celebrity transformations of the past decade.