Home » Entertainment » Jax Taylor Gives Update About His Relationship With His Mom: What We Know

Jax Taylor Gives Update About His Relationship With His Mom: What We Know 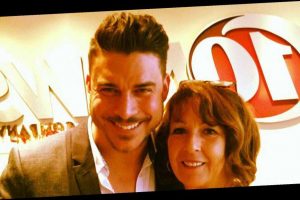 Jax Taylor’s life offscreen is still filled with drama. The Vanderpump Rules star’s mother, Marie Cauchi, was noticeably missing from his wedding to Brittany Cartwright — and it doesn’t look like the mother-son duo are making up anytime soon.

Jax’s issues with his mother began after his father, Ronald Cauchi, died after a battle with cancer.

“My heart is broken, I lost my best friend and the best man I have ever met last night,” the Bravo star announced in December 2017. “I love you so much dad I can’t even breathe anymore, only person not letting me fall right now is my amazing girlfriend [Brittany]. I love you dad.”

The reality TV personality later claimed that Marie didn’t give him and his sister, Jenny, all of the facts before Ronald passed way.

“I used to be very close to my mom. Everybody’s like, I love your mom. We really haven’t communicated in the last six months, pretty much since my father passed,” Jax said on a December 2018 episode of Vanderpump Rules. “Their marriage was on the rocks; she was talking about leaving my dad about a year before he got cancer. Toward the end, my mom would say, ‘Oh, he’s fine.’ We didn’t know he was in ICU; I would have been there in a heartbeat if I knew he was in ICU. I mean, I get it, my mother’s trying to protect my sister and I, but I should have been able to say goodbye to my dad.”

When it came time for Jax and Brittany to wed in June 2019, he opted not to invite his mother. After the episode aired in March 2020, the SUR bartender opened up about their current status.

“Everyone has family issues…. everyone!” he tweeted in March 2020. “Not one person in this world should ever tell another person how to act. Take care of each other and yourselves.”

Jax also made it clear at the time that he didn’t want advice from viewers.

“I mean I feel like it’s the unspoken topic, but people who give unsolicited advice are the ones that need it,” he tweeted. “The most and look the most pathetic. Save your speech not ONE person cares what you think.”

Scroll through for everything we know about Jax’s relationship with his mother: