‘Jean-Michel Basquiat’ at the Brant Shows His Bifurcated Life

A few years ago, a plaza in Paris was named after the artist Jean-Michel Basquiat, the Brooklyn-born painter who became a global sensation in the early 1980s and died at 27 of a heroin overdose. No similar honor has been bestowed upon Basquiat by the City of New York. However, the opening of the Brant Foundation Art Study Center in the East Village, with an exhibition of nearly 70 works by Basquiat created from 1980 to 1987, serves as a fitting temporary shrine. The Brant in Manhattan is also part of a wave of private museums opening across the country, including the Hill Art Foundation in Chelsea; the expansion of Glenstone in Maryland; and the Marciano and Broad collections in Los Angeles.

But first, Basquiat. The story of this painter of Haitian and Puerto-Rican descent is one of the most documented in contemporary art history. Basquiat moved to Manhattan — partly to escape his strict accountant father — couch-surfed, lived off girlfriends and formed a post-punk band called Gray after “Gray’s Anatomy.” He sprayed poetic, enigmatic graffiti on walls in downtown Manhattan before moving to canvas and starred in an independent film, “Downtown 81.” He dated Madonna before she was famous and made paintings with his hero-turned-friend, Andy Warhol.

Basquiat was also part of a group of Neo-Expressionists that were largely rejected by critics interested in photography, video and conceptual art — but embraced by a popular audience and a surging art market, where he often felt treated like a faux-primitive genius, which he found racist and demeaning. And yet, this seemed to fuel his work — and the anger in it — toward greater heights, forging a brand of African-American history painting that addressed everything from cultural figures to black policemen. His reputation has grown posthumously and in 2017 one of his paintings sold at auction for a record $110.5 million to a Japanese billionaire. 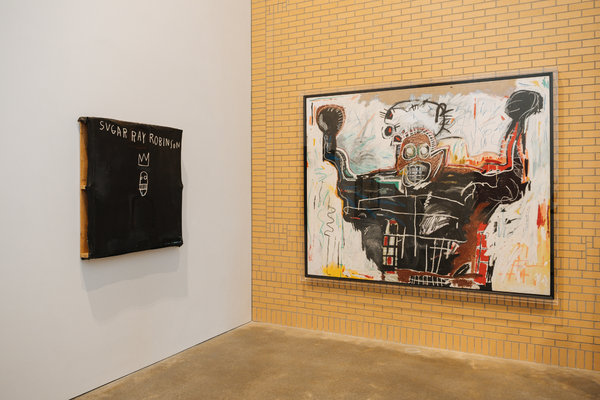 The show at the Brant Foundation, organized with the Fondation Louis Vuitton in Paris, where more than half of the works here were recently on view, fairly represents Basquiat’s contribution. He concentrated on the human figure and many of the works are grouped for heightened effect. One room is dedicated to paintings of boxers — Sugar Ray Robinson, Joe Louis, and Cassius Clay (later Muhammad Ali) — while another features loosely drawn heads and skulls. And yes, the $110.5 million painting is in the building: a ferocious “Untitled” (1982) skull made with black and colored spray paint and oilstick against a banal blue background.

Other paintings pay homage to jazz greats like Miles Davis and Charlie Parker (Basquiat worked in a similarly improvisatory way) and handwritten text appears everywhere. Basquiat favored the cutup technique of the Beat writer William Burroughs but he also witnessed the rise of rap and hip-hop music. His words feel eerily poignant today: “debt shrine,” “per capita,” “Hooverville,” “perishable,” “black teeth,” “immortality.” Others relate to histories from the Roman Empire to “Grillo” (1984), which mentions sugar and the West Indies and sports heavy nails like those driven into minkisi power figures in Africa to cast spells or seal contracts. Crossed-out words also recur in his paintings and are weirdly reminiscent of the bracketing or slashing of text in deconstructionist philosophy, to emphasize the cultural and biased nature of language. Funny to realize in retrospect that Basquiat and the French philosopher Jacques Derrida were on the same page.

Notable works include “Unbreakable” (1987), a late painting in which the human figure is mostly banished — the work has never been shown in New York. The wry “Hollywood Africans” (1983), on loan from the Whitney Museum, includes text like “gangsterism,” “tax free,” “200 yen” and “sugar cane, inc.,” linking up creativity, race and corruption. A dramatic salon-style wall on the second floor includes a grid of 16 paintings from 1982, on wooden supports constructed by Basquiat’s studio assistant.

So why open the Manhattan branch of the Brant with Basquiat? Peter M. Brant, a newsprint tycoon, was an early collector and the East Village was Basquiat’s old stamping grounds. The new Brant, an urban outpost of the Greenwich, Conn., institution, is in a former Con Edison power substation lavishly remodeled by the architects Gluckman Tang which was also, for several decades, the home and studio of the artist Walter De Maria, who was best known for “The Lightning Field” (1977) in the New Mexico desert.

Gluckman Tang has preserved the “bones” of the building — sturdy beige brick walls and sleek industrial staircases — and opened up rear-facing walls with windows that provide light and spectacular views of the neighborhood. The building includes four floors of exhibition space and a rooftop garden with a reflecting pool visible as a glittering skylight on the fourth floor. Nestled among old tenement buildings, the location feels very similar to Lafayette Anticipations in Paris, a new multistory foundation related to the nearby department store. Both institutions serve as emblems of the gentrification of former working- class neighborhoods, but also the proliferation of a new kind of museum.

Private collections have long histories — for instance, the Frick and the Morgan in New York — but also, at present, carry a double-edged meaning and purpose: They are private exhibition venues but also tax havens for the very rich. Mr. Brant was on the forefront of this phenomenon — both the private institution showcasing contemporary art and trouble with the IRS — when his foundation opened a decade ago across the street from his estate in Greenwich.

One of the arguments in support of the East Village space is that it offers free admission to see works that are rarely on view — although you have to make reservations, which are quickly becoming scarce. And the “free” admission to most of these private museums is the ultimate hidden-fee-economy tactic: We are all paying, in a variety of ways, to live in a system that supports colossal disparities of wealth. Museum admission might be free, but health care isn’t. .

Interestingly, Basquiat’s work speaks exactly to these issues, but in somewhat coded form. It’s an old, old story: the black artist (or musician) who makes raw, personal work and sells it to a rich white person. There is something that feels almost not right about looking too long at a Basquiat because it’s like looking into an open wound. He didn’t go to art school (except for a few life-drawing classes) to learn this because it’s way beyond art, which is the best kind of art. But the words in Basquiat’s paintings often point to what it’s like to be turned into a masterpiece, a financial instrument, and a trophy.

The show at the Brant doesn’t wade directly into this but the Guggenheim will, in an exhibition opening in June that focuses on the response of visual artists, including Basquiat, to the death of Michael Stewart, a young graffiti artist who lapsed into a coma while in the custody of New York transit officers in 1983. (The officers were acquitted by a jury). ”It could’ve been me,” Basquiat said. Instead, Basquiat continued on, living a bifurcated life in which his work was highly valued but his existence, he even stated, was not.

I stopped trekking up to the Brant Foundation in Greenwich because the program there didn’t reflect the art I wanted to engage with. It was overwhelmingly male, white and approached through the triumph of the market — what’s hot and expensive — rather than a more critical prism. The current show presents Basquiat in a gorgeous, former-industrial space — but there are already dozens of fantastic, adventurous and experimental spaces in the area.

Perhaps one way private and public museums can work together is this: Private ones offer more opportunities to see work that has been highly (or over) valued, rather than stowing it away in free ports or elsewhere, while public institutions do the difficult, scholarly work we expect. (The Brant advertises itself as a “study center,” but it’s not clear yet what is going to be studied.)

How the Brant will coexist with this context remains to be seen. It’s great to see Basquiat in the East Village — although, with its new condominiums, steep rents, and expensive restaurants, it barely resembles the neighborhood he inhabited 40 years ago. This exhibition will bring joy to a lot of people. The questions and complications it contains will reach far beyond Sixth Street and the art world.

Jean-Michel Basquiat
Through May 15 at the Brant Foundation, Manhattan; 212-777-2297, brantfoundation.org.