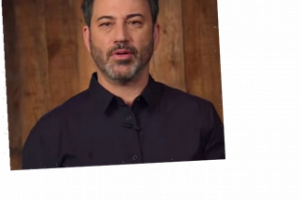 Jimmy Kimmel on Friday slammed Donald Trump as a “disgusting excuse for a president” and accused him of fanning the flames of the protests that have erupted following the death of George Floyd.

“Is this who you want leading us?” the “Jimmy Kimmel Live!” host asked viewers as he railed against Trump’s response to Floyd’s death in Minneapolis on Monday.

Floyd, an unarmed Black man, died after a white police officer knelt on his neck in a chilling incident that was caught on camera.

Trump had called the protesters “THUGS” and threatened violent retaliation from troops, warning on Twitter that “when the looting starts, the shooting starts.” Twitter applied a “glorifying violence” warning on the post.

“I don’t care what you are,” said Kimmel. “Right, left, Republican, Democrat. I can’t imagine that there are many of us that want that.”

“Enough is enough,” the comedian added. “We’ve got to vote this guy out already.”

Surprise! JoJo Siwa Changes Her Hair Color for the 2nd Time in a Week

END_OF_DOCUMENT_TOKEN_TO_BE_REPLACED

If you know anything about the Duggars, then you’re probably familiar with the infamous Duggar dress code. There are many absurd rules that the Duggar […]

Actress Zoe Tay – local television’s “Big Sister” – wished her stepmother a happy birthday on Instagram on Tuesday. The 52-year-old posted a photo of […]

END_OF_DOCUMENT_TOKEN_TO_BE_REPLACED

END_OF_DOCUMENT_TOKEN_TO_BE_REPLACED
We and our partners use cookies on this site to improve our service, perform analytics, personalize advertising, measure advertising performance, and remember website preferences.Ok