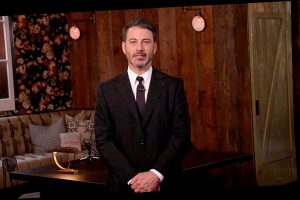 Jimmy Kimmel is apologizing for old comedy sketches in blackface and impressions of Black celebrities after they resurfaced online.

In a statement sent to various outlets and tweeted out by journalist Yashar Ali on Tuesday, the “Jimmy Kimmel Live” host said he was reluctant to address the controversy because it would be seen as a “victory by those who equate apologies with weakness and cheer for leaders who use prejudice to divide us.”

“That delay was a mistake,” wrote Kimmel. “There is nothing more important to me than your respect, and I apologize to those who were genuinely hurt or offended by the makeup I wore or the words I spoke.”

Kimmel pointed out impressions he did as far back as the mid-1990s of Black and white celebrities, including former NBA star Karl Malone, Snoop Dogg, Eminem and Oprah.

“In each case, I thought of them as impersonations of celebrities and nothing more. Looking back, many of these sketches are embarrassing, and it is frustrating that these thoughtless moments have become a weapon used by some to diminish my criticisms of social and other injustices,” said Kimmel, apparently referencing conservative critics who have called for his ouster.

He explained that he’s “evolved and matured over the last twenty-plus years” and hopes his TV audience agrees.

“I know this will not be the last I hear of this and that it will be used again to try to quiet me,” he said. “I love this country too much to allow that. I won’t be bullied into silence by those who feign outrage to advance their oppressive and genuinely racist agendas.”

Kimmel is currently on summer leave from “Jimmy Kimmel Live,” and many suspected the hiatus was connected to the resurfacing of an old sketch from Comedy Central’s “The Man Show,” showing Kimmel in blackface as Malone.

Kimmel, however, denied the speculation, saying his summer break had been planned for more than a year and includes the next two summers off, too. He’s set to return to work in September and also will host the 2020 Emmys.

He concludes his statement by saying: “Thank you for giving me an opportunity to explain and to those I’ve disappointed, I am sorry.”

In addition to the Malone sketch, audio of Kimmel reportedly using a racist slur while impersonating Snoop Dogg for a 1996 Christmas album and an old clip of the comedian joking about actor Megan Fox being sexualized while underage also have gone viral recently, causing hashtags such as #CancelKimmel to trend on Twitter. The clips are circulating amid heightened demands to end racial injustice, sparked by the Minneapolis police killing of George Floyd last month.