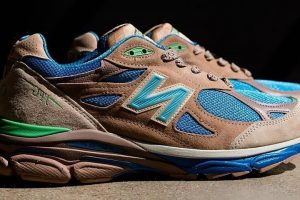 Throughout the course of 2021, various brands have gotten the opportunity to put a creative spin on the classic New Balance 990v3 — arguably the best variation out of the 990 series. And after Bodega celebrated its 15-year anniversary with a pair along with Levi’s teasing its forthcoming version, the silhouette is now being reimagined by Joe Freshgoods. The collaboration is titled the New Balance 990v3 “Outside Clothes” and serves as a striking follow-up to the designer’s New Balance 992 “No Emotions Are Emotions” from 2020 that launched in 2020.

While the pair is reliant on earthy hues to cover most of the ground, it’s the vivid accents here that really spruce up its overall design spirit. Dusty beige shadings cover the tongues and overlays on the side panels while the mesh materials that lie beneath are doused with bold blue tone. Aqua hits and leafy green hits are also present, the former of which touches the interior lining and N logos while the latter appears on the collar eyelets, “JFG” heel hits, lower heel counters and the New Balance branding on the tongues. Sole pieces down under also color-block between a dirt-like brown and blue forefoot panel.

Joe Freshgoods has confirmed that these will be dropping early in his hometown of Chicago come Thursday, August 5. Exact details as to where or how these will be released has yet to be announced.