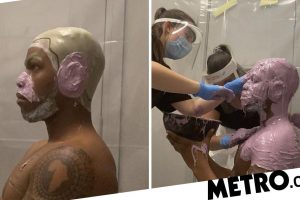 John Boyega has got his fans all riled up, after teasing a new project he is working on by sharing behind-the-scenes snaps to Instagram.

The actor, 28, posted a series of photos that depicted him having a clay mold painted onto his face, with the last photo seeing him appear as a blue figure on a computer screen.

John shared the process with fans and was seen sitting in a chair, while three crew members sporting face shields covered him in the purple mixture from the shoulders up.

Naturally, fans couldn’t help but try and guess what exactly John has got himself in for, with many taking his blue character to mean he could be a part of the new Avatar movies.

James Cameron’s original film was released in 2009 and a sequel is currently in the works and scheduled for release in 2021, with another three films to follow after that.

‘Avatar?’ commented one fan underneath John’s post, while another seemed to be thinking the same and said: ‘This is definitely avatar right?’

Others thought that John could be working on a new Marvel role, while some fans thought it might be for a video game instead.

‘I smell a video game in the air,’ posted one fan, as John’s head cast certainly got his followers talking.

‘Oh man!! I can’t wait @johnboyega. It’s going to be a good one I already know,’ said one more, while another follower wrote: ‘Excited to find out what it is!’

So far, John isn’t giving anything away, but it seems his new project has got him brushing off his recent drama with Jo Malone.

John had been the first male global ambassador for Jo Malone, but quit his role after he was cut from their advert in China.

He was edited out of the advert and replaced by actor Liu Haoran, with John releasing a statement on Twitter claiming the decision was made ‘without either my consent or prior notice’.

John later received an apology from Jo Malone – the brand shared a statement to The Hollywood Reporter that read: ‘We deeply apologise for what, on our end, was a mistake in the local execution of the John Boyega campaign.

‘John is a tremendous artist with great personal vision and direction. The concept for the film was based on John’s personal experiences and should not have been replicated.’

END_OF_DOCUMENT_TOKEN_TO_BE_REPLACED

END_OF_DOCUMENT_TOKEN_TO_BE_REPLACED
We and our partners use cookies on this site to improve our service, perform analytics, personalize advertising, measure advertising performance, and remember website preferences.Ok