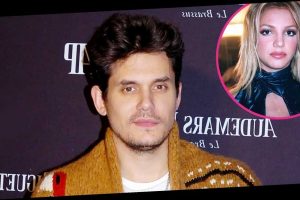 Taking it all in. John Mayer admitted to getting emotional while watching the Framing Britney Spears documentary earlier this month.

“Obviously, there’s a lot to parse on a sociological level. I almost cried five times during that,” the “New Light” crooner, 43, said while guest cohosting SiriusXM’s Andy Cohen Live on Monday, February 22. “There’s a debate as to whether the times in and of themselves kind of encased this behavior. Like, it’s hard to go back into the sap and cut into it because it is sort of suspended in amber, some of this stuff. But, to see the sadness in this human being … I was on the edge of tears five times because if you understand what this business/industry/lifestyle does to a person, to go through this and come out the other side OK is to have infinite grace for those who struggle with it.”

As Mayer went on to compare his experience making it to the top in the cutthroat music business to Britney Spears’, he said that he likely “came out OK” because he’s a man.

“I have a very strong feeling that a lot of these things that happen to female performers is endemic to being female,” he explained. “Why do so many men emerge going, ‘Learned my lesson. Yes, I got dinked in the head, but I’m back, baby.’ So, I watched it with such grace for someone who got much more maligned by the inhuman experiment of fame than I did. And I go, ‘Why did I get through that? Why did I find my way through that obstacle course? What was afforded to me stylistically?’ The stylistic difference of being an outlaw. If you’re a man, you’re an outlaw. If you’re a woman, you’re kind of crazy. And when I watched that through that lens, my heart just ached the whole time.”

Spears, 39, was the subject of The New York Times’ latest special, released on FX and Hulu on February 5. The hour-long episode explored the “Toxic” singer’s rise to fame and her controversial conservatorship, which she been under since 2008 following her public meltdown and split from ex-husband Kevin Federline.

The Crossroads star, who shares sons Sean Preston, 15, and Jayden, 14, with Federline, 42, has been fighting to get her father, Jamie Spears, removed as her sole conservator. However, in November 2020, she lost her bid to have the 68-year-old relinquish his control over her estate but succeeded in having financial company Bessemer Trust named as a co-conservator.

“Now it’s important for people to understand that I have no respect for someone trying to control our relationship and constantly throwing obstacles our way. In my opinion, Jamie is a total dick,” the dancer, 26, wrote via his Instagram Stories on February 9 as he slammed his girlfriend’s father. “I won’t be going into details because I’ve always respected our privacy but at the same time I didn’t come to this country to not be able to express my opinion and freedom.”

A source told Us Weekly exclusively that the documentary has garnered “mixed” reactions from people in Britney’s camp.

“Her dad and others in the conservatorship are far from happy about it, obviously, because they feel it’s another example of them being painted as money-grabbing villains when all they’re doing — so they say — is trying to help Britney run her life and stay in a safe place,” the insider revealed on February 10. “But there are growing numbers of people who think it’s high time this extremely sad and confusing story was aired and it’s a positive step in the right direction.”