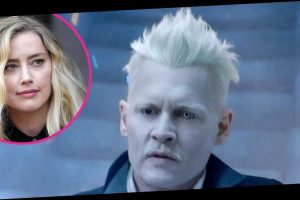 Evanesco! Johnny Depp revealed that he was dropped from the Fantastic Beasts franchise after a judge ruled that he abused ex-wife Amber Heard throughout their relationship.

Stars Who Were Fired From Jobs

“In light of recent events, I would like to make the following short statement. Firstly, I’d like to thank everybody who has gifted me with their support and loyalty,” the actor, 57, wrote via Instagram on Friday, November 6. “I have been humbled and moved by your many messages of love and concern, particularly over the last few days.”

He continued, “Secondly, I wish to let you know that I have been asked to resign by Warner Bros. from my role as Grindelwald in Fantastic Beasts and I have respected and agreed to that request.”

Depp ended his statement by maintaining his innocence, writing, “The surreal judgement of the court in the U.K. will not change my fight to tell the truth and I confirm that I plan to appeal. My resolve remains strong and I intend to prove that the allegations against me are false. My life and career will not be defined by this moment in time. Thank you for reading.”

The Pirates of the Caribbean star made his debut as the dark wizard Gellert Grindelwald in the 2016 Harry Potter prequel Fantastic Beasts and Where to Find Them. He reprised his role in 2018’s Fantastic Beasts: The Crimes of Grindelwald and was slated to return for the as-yet-untitled third film.

“Johnny Depp will depart the Fantastic Beasts franchise,” Warner Bros. said in a statement to Us Weekly on Friday. “We thank Johnny for his work on the films to date. Fantastic Beasts 3 is currently in production, and the role of Gellert Grindelwald will be recast. The film will debut in theaters worldwide in the summer of 2022.”

Johnny Depp and Amber Heard’s Court Battle: Everything to Know

J.K. Rowling, who wrote the Harry Potter books, defended casting Depp in the franchise in a December 2017 blog post, writing in part, “Based on our understanding of the circumstances, the filmmakers and I are not only comfortable sticking with our original casting, but genuinely happy to have Johnny playing a major character in the movies.”

Ten months later, the Sweeney Todd star told Entertainment Weekly that he had been “falsely accused” and that the author, 55, “would not stand up [for him] if she didn’t know the truth.”

The decision to fire Depp came four days after a London judge found sufficient evidence to prove that the movie star was a “wife beater” and had physically assaulted Heard, 34, at least 12 times. The former couple were married from 2015 to 2017.

If you or someone you know is experiencing domestic violence, please call the National Domestic Violence Hotline at 1-800-799-7233 for confidential support.

END_OF_DOCUMENT_TOKEN_TO_BE_REPLACED

END_OF_DOCUMENT_TOKEN_TO_BE_REPLACED
We and our partners use cookies on this site to improve our service, perform analytics, personalize advertising, measure advertising performance, and remember website preferences.Ok