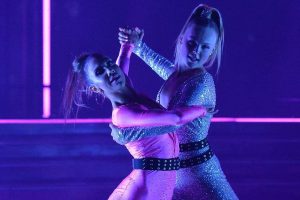 JoJo Siwa has been dominating the dance floor on Dancing With the Stars this season, which made her recent spot in the bottom two a big shocker. During Queen night on Monday, the 18-year-old YouTube personality and her partner, Jenna Johnson, performed an electric tango to the band’s hit song “Body Language.” With moves just as flashy as their outfits, it wasn’t a surprise when their performance earned them a nearly perfect score with 39 out of 40 points. What was surprising was that Siwa and Johnson still found themselves in the bottom two at the end of the night. Given all of their great numbers this season, the judges ultimately chose to save Siwa over The Miz in the end. Watch their Queen performance above.