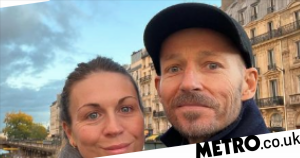 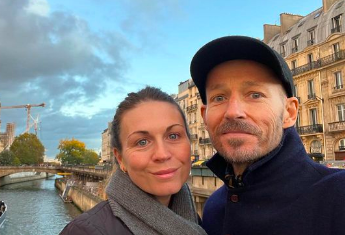 Jonnie Irwin has opened up about having a ‘hell of week’ after revealing his cancer diagnosis.

The A Place In The Sun host announced earlier this week that could have just months to live after the cancer in his lung spread to his brain.

The 48-year-old, who learned he had the disease in 2020 while filming in Italy, had chosen to keep his diagnosis private, admitting he wanted to ‘get the monkey off my back’ and speak openly about it.

Since going public, the TV star has thanked his fans for their support, saying that he was ‘overwhelmed by your kind messages.’

On Friday, Jonnie shared another update with his followers, writing on Instagram he had been ‘bowled over’ by the ‘lovely’ response.

He penned: ‘Been a hell of a week. I’m bowled over by the lovely messages thank you all so much. As touching as it’s been, I’ve also found it quite surreal – almost like we’re talking about some else.’

Jonnie is married to Jessica Holmes, 40, and they share three sons – Rex, three, and two-year-old twins Rafa and Cormac.

In the post, he added that he had jetted off to Paris to enjoy a break with Jessica, sharing a cosy picture of them near the River Seine.

Jonnie said: ‘By my side throughout this is my wife so thought I’d take us to Paris for the weekend. We could only do this with the help from my family, in particular my amazing sisters who dropped everything and have driven up to the Toon to look after the boy band. We are having an amazing time. Thanks so much.’

Jonnie first got a warning sign that something wasn’t quite right in August 2020, when his vision became blurred while driving, prompting him to have tests back home.

‘Within a week of flying back from filming, I was being given six months to live,’ he said. ‘I had to go home and tell my wife, who was looking after our babies, that she was on her own pretty much. That was devastating. All I could do was apologise to her. I felt so responsible,’ he told Hello!.

Jonnie has been undergoing chemotherapy and he’s continued to work throughout, with cancer drugs helping to prolong his prognosis.

Among those to share their support for Jonnie have been his TV colleagues, including Jasmine Harmin, who started working with him on A Place In The Sun in 2004.

She said: ‘Sending lots of love and support to my great friend and original partner in crime @jonnieirwintv.

‘I know it has taken bravery to share your story. As ever a true inspiration & always positive and up for a laugh no matter what the circumstances. love to you and your beautiful family.’

Newsreader and A Place in the Sun star Danni Menzies shared a joyous picture of her, Jonnie and co-star Jean Johansson.

‘You ledge @jonnieirwintv so incredibly brave to share your diagnosis with the world,’ she wrote on Instagram.

I’m A Celebrity continues tomorrow at 9.10pm on ITV.