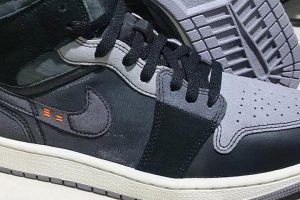 Following a number of installments, Jordan Brand looks to release a new Air Jordan 1 Mid in addition to the “Inside Out” series in a stealth black and gray colorway. The Brand recently released an Air Jordan 1 Low variation after kicking off the year with a light neutral edition.

Thanks to Solebyjc, we got a lateral preview of the upcoming pair outfitted in a variety of textures structuring the shoe in a shadow-like color scheme. The uppers start off with a dark gray base for the quarter panels while suede details are sewn over from the toe box to the overlays and heel cap in a mix of black and tints of gray. The main Swoosh makes an appearance with orange stitches representing the #23 from the low leather heel tab featuring the signature Wings motif. A Sail-colored midsole is sandwiched between the uppers and a gray rubber outsole to seal it all together.

Further information on the latest Air Jordan 1 Mid “Inside Out” is yet to be announced, but will most likely see a release in the coming months at select retailers and via Nike’s website.