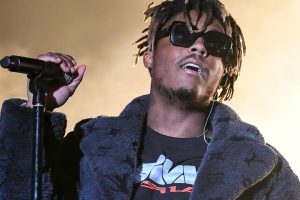 The song was announced on Thursday via a trailer posted to Juice’s YouTube account. Opening with a quote from the late rapper that read “you have power over depression,” the video laid audio of the two artists opening up about their mental health struggles over a video montage of clips of Juice.

The track, which was released earlier today, came paired with an animated rendering of Juice and Bieber looking out towards the city of L.A.

“I wandered to LA hopin’ to explore,” Juice raps. “Little did I know, I’d find a little more.”

Bieber enters with his verse approximately halfway through the song.

“Wandered to L.A.” trails “Already Dead” as the second single to be shared from Juice’s second posthumous album Fighting Demons. A follow-up to 2020’s Legends Never Die, the new LP is slated to premiere on December 10.

“There was nothing Jarad “Juice WRLD” Higgins enjoyed more than delivering new music to his millions of fans around the world,” said the rapper’s mother, Ms. Carmella Wallace, in a joint statement with Grade A Productions. “He left behind an astonishingly deep catalog of music that will ensure his fans will have new songs to listen to for years to come. Jarad was always searingly honest about his struggles and through his musical genius he articulated what was on his heart and mind vividly through his art. He never gave up and his friends and family never gave up on offering their support to him.”

To mark the album’s debut, Juice WRLD Day 2021 will take place on December 9. The rapper’s estate will hold a Fighting Demons pre-release listening event and a preview of his upcoming HBO documentary, as well as special guest appearances and performances, at the United Center in Chicago.

In other music news, Gucci and Billie Eilish have released a limited-edition Happier Than Ever vinyl set.
Source: Read Full Article