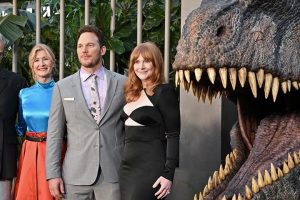 Jurassic World: Dominion debuted at the top of the box office with a total of $143 million USD in earnings from 4,676 theaters in its opening week.

According to reports, the Chris Pratt and Bryce Dallas Howard-led film’s local box office earnings add to its overseas total of $245 million USD, generating a worldwide tally of $389.17 million USD. Dominion is only the third pandemic-era film to surpass the $200 million USD mark, but still opens with a smaller amount in comparison to its predecessors Fallen Kingdom, which domestically debuted with $148 million USD, and Jurassic World, which debuted with $208 million USD.

“This is an excellent opening,” David A. Gross OF Franchise Entertainment Research said. “Reviews are weak, but that has never stopped these beasts.”

Early reviews of the third film in the rebooted franchise, which also includes franchise stalwarts Sam Neill, Laura Dern and Jeff Goldblum, were not the most pleasant, gave the franchise’s worst Rotten Tomatoes score with only 38% from 141 reviews.