A federal jury in New Hampshire said a former college professor and her son defrauded a Wall Street titan by selling him a series of fake paintings they claimed were by the modern artist Leon Golub.

After deliberating for about two hours, the civil court jury in Federal District Court in Concord on Thursday ordered Lorettann Gascard, 70, formerly of Franklin Pierce University in New Hampshire, and her son Nikolas Gascard, 36, to repay Andrew J. Hall, a trader and a prolific art collector, $465,000.

The lawyer for the Gascards, William B. Pribis, had no comment and said no decision had been made about an appeal. But the finding seemed to end a saga that began when Mr. Hall, who had amassed a fortune with canny trades in oil markets, started building a personal art collection, including many works by Golub, an American postwar painter whose art explored dire political conditions with expressionistic, heroic-scale figures. Mr. Hall believed Golub’s work was undervalued and due to appreciate.

[Read more about the case.]

From 2009 to 2011, Mr. Hall bought 24 paintings from the Gascards, several at Christie’s and Sotheby’s auction houses in New York, one on an online auction site, and 16 directly from the Gascards after Nikolas Gascard reached out and made contact with Mr. Hall.

But Mr. Hall became suspicious in 2015 when he set out to stage an exhibition of Golub’s art at the private rural museum he established near his home in Reading, Vt. 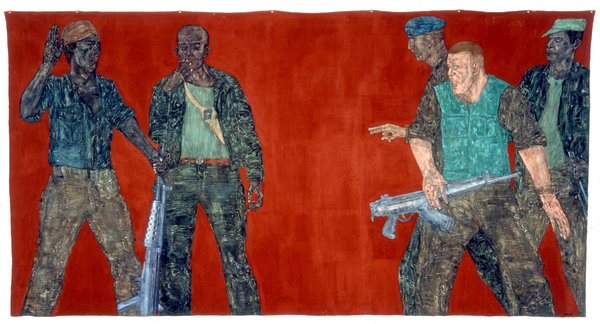 A foundation established to promote work by Golub and his wife, the artist Nancy Spero, examined the paintings and found problems, including no record of the Gascard Golubs in the foundation’s database and “a number of unusual formal characteristics during in-person examinations of the paintings,” according to court papers.

The Gascards denied the paintings were fakes. Ms. Gascard said that she had gotten to know Golub while attending his classes at Fairleigh Dickinson University in Teaneck, N.J., in the late 1970s, and that they had become close friends until his death in 2004.

She and her son told the court that Golub had given her some works and that members of her family who lived in Germany had separately collected Golubs, which the Gascards found and retrieved following their relatives’ deaths. Mr. Gascard did admit to making up titles and dates for some of the paintings, saying in a deposition that he had arrived at the dates based “on my research and the style of painting,” according to The Keene Sentinel.

Showing some of the works to the jurors, Professor Bird said that the dates of the works did not match Golub’s style at that time and that they did not appear to have been made with Golub’s familiar scraping technique. Instead, the paint had been layered on, Mr. Poretz said.

Professor Bird also said the depiction of human forms did not share the same nuance that Golub was known for, Mr. Poretz said.

At Franklin Pierce, Ms. Gascard taught undergraduate art history and drawing and supervised the college art gallery. An artist herself, practicing a technique called rust art, she often walked around campus wearing white gloves and dark glasses, faculty colleagues said. She left Franklin Pierce in 2015 after an unrelated dispute with the administration.

Ms. Gascard said that she did not paint, but a former neighbor came forward at the last minute, testifying at the trial that she had often smelled paint and had seen painting tools and unfinished paintings in the basement she shared with Ms. Gascard, Mr. Hall said.

In an interview, Mr. Hall said that even though some people wondered why he had wanted to draw attention to the fact that he had been tricked, he said he was glad he had pursued the case and now felt vindicated. “People thought maybe I was rash and should put it down to one of life’s rich experiences,” he said. “But people defrauding other people, especially in the art market, should not be allowed to get away with it.”

Mr. Hall said that though he was satisfied because he was getting his money back, “I am even happier for Leon Golub and his legacy that was being impaired by this whole business.”

Mr. Hall earned his fortune making large bets in commodities markets. In 2009, at the helm of Phibro, part of Citigroup, he was set to receive a $100 million bonus. That became a flash point for national anger over executive pay at a time when Citigroup had accepted bailout money from the federal government after the financial crisis.

In the interview, he said he did not know what he was going to do with the Gascard paintings. “Probably have a big bonfire,” Mr. Hall said.

The jury found for Mr. Hall’s claim against Nikolas Gascard for fraud, and against both Nikolas and Lorettann Gascard for conspiracy to defraud.