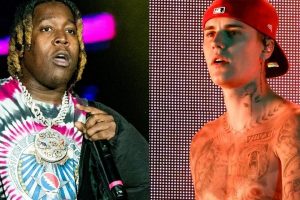 Justin Bieber is back with a new track, joining forces with Don Toliver for “Honest.”

Prior to the release of “Honest,” the Biebs debuted a comedic track and visual titled “I Feel Funny” to tease his upcoming video collaboration with Cole Bennett. Bennett also directed the music video for “Honest” which sees both artists jet skiing through the snowy, mountainous terrains in an action-packed sequence. Bennett spoke about the two videos and said, “Justin randomly texted me this song one day and said ‘Should we do a visual to this? song straight to number 1.’ We joked around about doing a video for it but never did.” He shared how the teaser and the actual video came about stating, “A few weeks later we were doing a pick up day for a video we had recently shot, but never finished (“Honest”). We had a bit of time switching over from scene to scene. So, I went into his trailer and said, ‘Remember that song you sent me? Let’s shoot a video for it on my phone in between takes of the actual video.’ The rest was history. Enjoy.”

Justin Bieber also spoke to Ebro Darden on Apple Music 1’s New Music Daily and praised Toliver and discussed why he chose to work with him,

“Man, so I have always just loved his…He’s got such a unique, I mean, the best way to say it is his swag. I don’t know if that word is dated, but…he just has this like little bop about him and he’s very unique, he’s very Houston. Shout out to Houston. We’re going to be in Houston on Friday I believe.

And so, yeah, I just love his melodies these are honestly insane. He has a really amazing cadence to his songs and his music. And I’m just a genuine fan. He’s very unique. And he just is himself. And that’s what I love about any artist that can just has a lane and does what they do and does it well.”

Watch the visuals for “Honest” above and take a listen below.