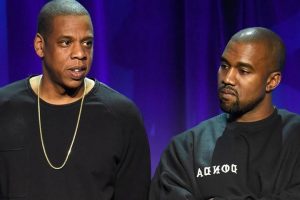 Kanye West debuted his highly-anticipated album DONDA to a sold-out stadium in Atlanta tonight, and he closed it out with one of the biggest surprises: a new collaboration with JAY-Z.

The performance ran for around an hour and heard a slate of initial guest verses from Travis Scott, Pusha T, the late Pop Smoke and Lil Baby before Ye dropped the bombshell collab as his finale. Their new track hears sharp electric guitars and loud thumping drums as West sings the lyrics “Guess who’s going to jail tonight? / God going to post my bail tonight,” followed by a full verse from Hov where he raps “This might be the return of the throne.”

A Watch the Throne 2 album is still unannounced to this day, but this cut marks the pair’s first collab in a long time and essentially reaffirms Hov and Ye’s brotherhood. Fans are now hoping for even more projects between the two, especially since they seem to be on good terms again.