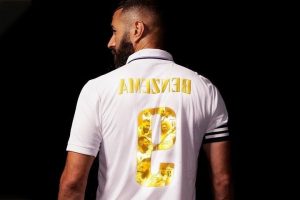 The Ballon d’Or is football’s biggest individual sporting achievement. The award is given to the best footballer of the year and since 2008, the top prize has been shared between arguably, the two best players in history: Lionel Messi and Cristiano Ronaldo. And while Croatian footballer Luka Modric took the prize home in 2018, the beautiful game’s recent history will always be referred to as the Messi x Ronaldo era. However, last night, the 2022 Ballon d’Or award ceremony appeared to see the end of this said era, with Ronaldo coming in 17th position, and Messi not even making the shortlist for the first time since 2005. With this being said, world football has just welcomed a new winner in Real Madrid striker Karim Benzema, who was the runaway favorite after spearheading Madrid’s successful Champions League campaign and netting 44 goals in 46 appearances across all competitions.

Benzema’s win in Paris last night is the pinnacle of the Frenchman’s career so far, who’s been playing — and consistently scoring — at the top level since 2005. The forward moved to Real Madrid from his home club of Lyon in ‘05, and since then, he’s been one of adidas Football’s longest-serving athletes. With this in mind, the Three Stripes is celebrating Benzema’s Ballon d’Or victory in style with a new film aptly dubbed Hand of Gold. The new film shows Benzema’s iconic hand bandage — that he’s worn in every game since 2019 — turn from white to gold, which is deemed as the color of victory. The film also tells Benzema’s footballing story that started as a young boy in France, who eventually made it to the top.

Coming along with the film, adidas has also presented two limited-edition product modifications that celebrate the striker’s achievement. Benzema’s boot of choice, the X Speedportal, has been customized with gold accents, sole plates, and aglets that are inspired by the tones of the French tricolor. The celebrations have also come with a special edition gold name and numbered Real Madrid jersey, which will be available for a limited time from October 18 on the official Real Madrid webstore and adidas stores.