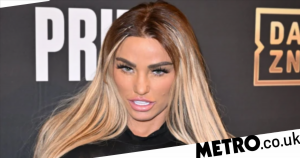 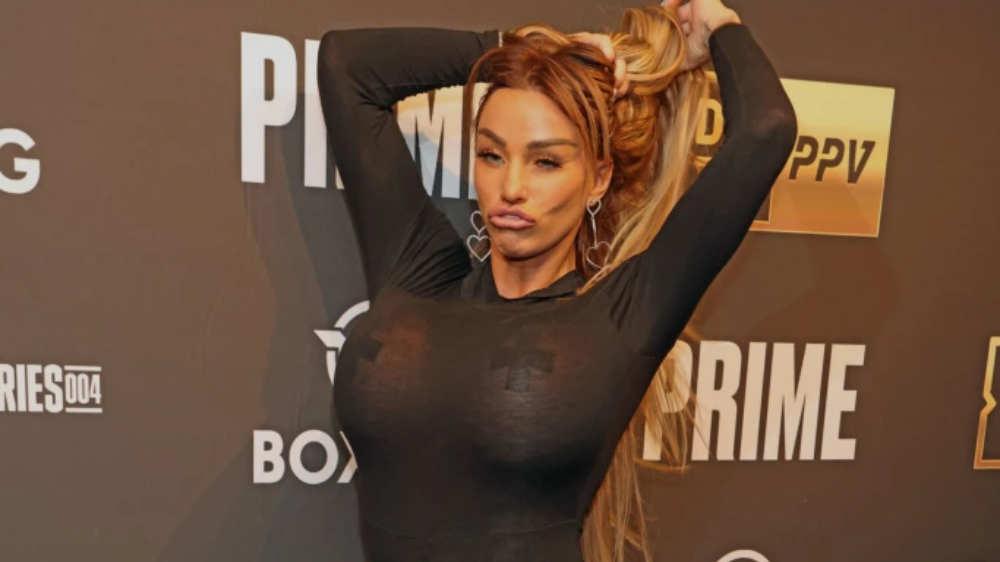 Katie Price has revealed the results of her latest plastic surgery after going under the knife once more.

The former glamour model recently had not her first, nor her second, but her 16th boob job, having become known for her ample breasts over the years.

It was claimed that the reality star wanted the biggest breasts in Britain, with her latest procedure certainly assisting her on the path to achieve that goal.

Following her latest round of surgery, it’s believed that Katie got ‘massive 2120 CC implants,’ according to a source.

Posing up a storm at the KSI v FaZe Temperrr boxing match, the 44-year-old donned a risqué jumpsuit.

Pouting for the cameras, Katie squeezed her curvy figure into a black outfit, which didn’t leave much to the imagination.

The mum-of-five covered her nipples with duct tape, but the size of her surgically-enhanced breasts was impossible to ignore.

Katie teamed her racy ensemble with a pair of killer knee-high boots, bedazzled in silver gems.

The former I’m A Celebrity campmate wore her blonde locks sleek and straight, but couldn’t resist holding up her hair for that classic Pricey pose ahead of the event.

Katie wasn’t flying solo, though, as she was joined by second eldest child Junior Andre, who was more than happy to snap a pic with her at the OVO Arena in Wembley.

Looking casual yet suave, the 17-year-old rocked up in a trendy yellow puffer jacket with matching tracksuit bottoms.

The young musician – who is set to release his debut album this year – kept it cool as he stood with his hands in his pockets, while mum Katie placed a loving arm around his shoulders.

Katie shares Junior – as well as 15-year-old daughter Princess – with ex-husband Peter Andre, whom she split from in 2009.

She’s also a mum to eldest Harvey, 20, whom she shares with Dwight Yorke, and Jett, nine, and Bunny, eight, whose father is her ex, Kieran Hayler.

Definitely not pictured at the event though, was her ex Carl Woods, whom Katie officially split from last month after a two-year rocky romance.

The boxing match saw YouTube star KSI return to the ring to take on opponent FaZe Temperrr in the latest Misfits boxing card.