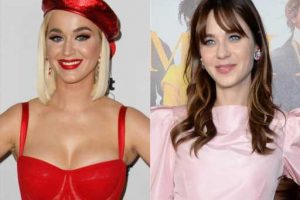 Katy Perry and Zoey Deschanel are finally admitting what we knew all along — they look like twins. OK, maybe not identical twins, but there are definitely physical similarities between the pop star and the actress. They decided to get into the twinning game with Deschanel appearing in Perry’s latest music video for her new single, “Not The End Of The World” from her latest album, Smile.

The campy video dropped on Monday with an alien abduction theme surrounding — you guessed it — the end of the world. Perry is being tracked by aliens through a stuffed animal owned by her daughter, Daisy, 4 months. As Perry walks through the park and right past Deschanel on a park bench, the baby’s toy drops out of the carriage. The aliens make the big pop culture error many fans have made and believe Deschanel is Perry.

Ever since Perry came on to the music scene in 2007, the two have had to answer the question… do you know who you look like? For Deschanel, it wasn’t always an easy answer. “It’s a little bit annoying, to be totally blunt, she told MTV in 2009, “The only similarity that we have is that we look a little bit alike.”

There was no animosity about it, though. The former New Girl star joked that they’ve met before and she was “happy that she’s famous enough now that she’s not going out and being mistaken for me.” Of course, it was a little bizarre when people were accusing Deschanel of partying at a club when she was home on her couch watching TV. That, of course, was Perry, who was out on the town.

It got easier as Perry consistently changed her hair color from brunette to blonde and sometimes, blue, depending on her mood. Yet those big, blue eyes still made people think the two celebs were separated at birth. Deschanel admitted to New York magazine in 2011, “I probably answer more questions about her than about my own family,” so it was time for the two of them to embrace what we’ve all been discussing for 13 years.

Deschanel was a good sport to not only participate in the music video, but don some of her doppelgänger’s most iconic outfits while the aliens cheer her on. One blue wig was all it took for fans to do a double-take — is that Perry or her twin? It’s the pop culture moment we deserve in 2020.

Before you go, click here to see celebrities who look so much alike, it’s crazy.

END_OF_DOCUMENT_TOKEN_TO_BE_REPLACED

END_OF_DOCUMENT_TOKEN_TO_BE_REPLACED
We and our partners use cookies on this site to improve our service, perform analytics, personalize advertising, measure advertising performance, and remember website preferences.Ok