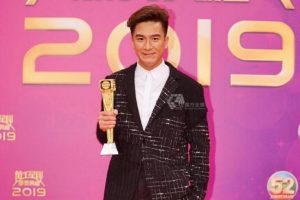 Kenneth Ma has been crowned Best Actor for the first time at the TVB Anniversary Awards 2019 on Sunday (Jan 12), after having been nominated a whopping 12 times at the awards.

The 45-year-old actor, who broke off with girlfriend Jacqueline Wong last year after she was caught in a cheating scandal with married singer Andy Hui, won the award for his role as a doctor in medical drama Big White Duel.

Ma was given a standing ovation after his ex-girlfriend Nancy Wu, rumoured girlfriend Natalie Tong and actress Ali Lee announced on stage that he was the Best Actor winner.

The actor, who has been in the entertainment industry for more than 20 years, said he was surprised at the win and thanked the audience for their reactions after he received the trophy.

“I consider myself a winner even if I do not win, as there are many strong contenders this year,” he said. “I am lucky to have acted in Big White Duel.”

Big White Duel was one of TVB’s anniversary dramas in 2019 and was well received when it was aired in June and July last year. It also won Best Drama Series and Most Improved Female Artist for actress Kelly Cheung.

Meanwhile, the Best Actress award went to Kara Wai for her role as a police chief superintendent in police drama The Defected.

Like Ma, the 59-year-old actress won the award for the first time and became only the second Hong Kong actress after Carol Cheng to have won Best Actress for both television and movies.

Both Miriam Yeung and Selena Lee won the Most Popular Female Character for their roles in romantic comedy Wonder Women and supernatural drama Barrack O’Karma respectively, the first time the award was shared in TVB history.

This was the first time Yeung won at the TVB Anniversary Awards, while it was Lee’s first individual ward at the anniversary awards, Ming Pao Daily News reported.

Actor-singer Pakho Chau won the Most Popular Male Character and Most Popular Drama Theme Song for Wonder Women. He disclosed after accepting the trophy that he was recently hospitalised for high fever, and he had to be supported by staff while leaving the stage.

Veteran actor Lau Dan won the Lifetime Achievement Award, receiving the award from actress Nancy Sit, his co-star in TV drama A Kindred Spirit (1995 to 1999). Lau, who celebrated his 76th birthday on Monday and is the father of actor Hawick Lau, said this was his first award in 52 years of acting.

The TVB Anniversary Awards 2019 was originally scheduled to be held in December, but it was postponed to January due to the Hong Kong protests.

END_OF_DOCUMENT_TOKEN_TO_BE_REPLACED

END_OF_DOCUMENT_TOKEN_TO_BE_REPLACED
We and our partners use cookies on this site to improve our service, perform analytics, personalize advertising, measure advertising performance, and remember website preferences.Ok