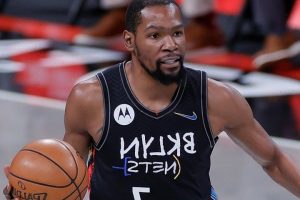 After the Brooklyn Nets defeated the Boston Celtics on May 22, Kevin Durant took a moment to reflect on what was his first playoff game in two years.

During the postgame interview, the Nets PF shared his excitement in playing during the postseason and the difference in intensity during the regular season. “I mean it’s always great playing this time of year,” Durant said. “You know, the intensity is the next level — it’s a different level from the regular season, so it felt great to be back out there amongst the best teams and best players in the league. Looking forward to game two.”

Durant played a total of 39 minutes during the first round and logged 32 points, 12 rebounds and one assist, helping the Nets claim victory over the Celtics 104-93. The two teams are set to play game two on May 25.

KD last appeared in the postseason during Game 5 of the 2019 NBA Finals between the Golden State Warriors and the Toronto Raptors. At that point, he had already been out nine games due to a strained right calf, then he suffered an Achilles tendon injury in the second quarter while attempting to drive Serge Ibaka. The two-time NBA Finals MVP then signed to the Nets in July 2019 but sat out the entire season; his first game with the Nets was in December 2020 where he scored 22 points to help win against the Warriors.

Elsewhere in sports, cast your vote on who you think will win this year’s NBA MVP in the newest HYPEBEAST poll.
Source: Read Full Article