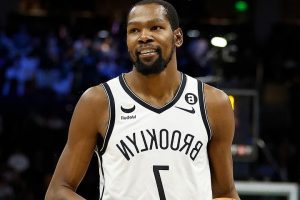 The Brooklyn Nets star has been following the NFL team and the events of Dan Snyder’s potential sale. Last week, Snyder and his wife announced that they have hired the Bank of America Securities “to explore potential transactions involving the team.” In a recent interview with ESPN Durant revealed his interest,

After JAY-Z and Bezos expressed their interest, Mat Ishbia, a finalist for the Denver Broncos’ ownership bid also released a statement that he would be interested. Byron Allen, who also bid on the Broncos, said he is also interested. Durant added, “I mean, how long has he had it now — 20-something years? He’s probably the only owner I’ve known since I’ve been alive for the Redskins/Commanders. So it’s definitely shocking to see him put them up because it’s his baby. NFL teams are precious, they’re important.” He explained, “But that’s going to be a team that everybody — everybody wants to be a part of the league. It’s one of the most lucrative teams in sports, so I’m sure there’s going to be a lot of bidders.”

Durant has long been a fan of the Commanders and once gave his jersey to Commanders wide receiver Terry McLaurin recently at a Nets game. Durant explains that there appears to be a lot of support in D.C. and that there is “a lot of money in D.C. to be made.” KD currently owns 5% stake in the Philadelphia Unions of the MLS and recently became a co-owner of a pickelball team.