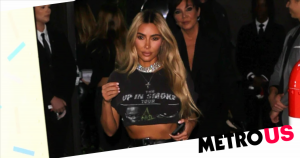 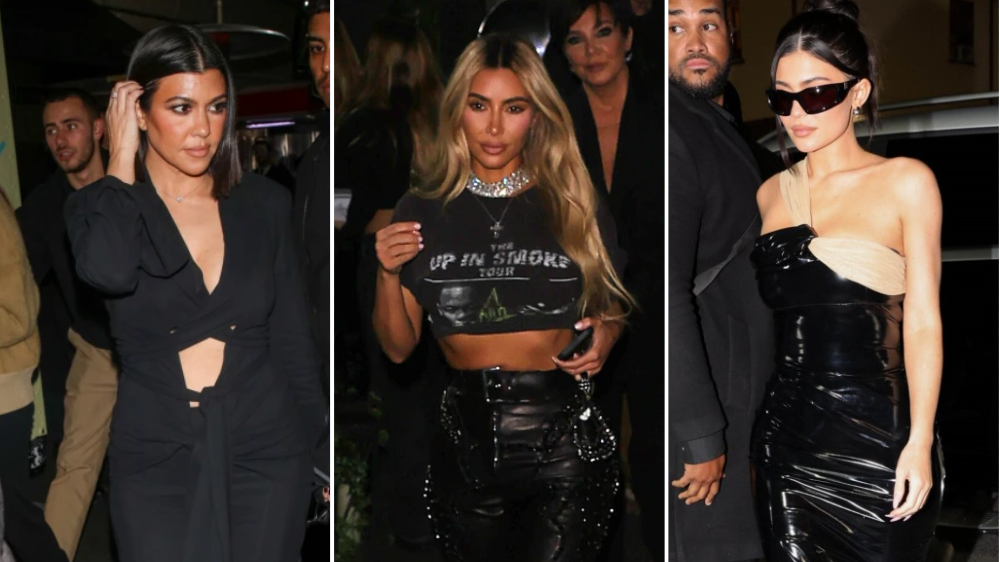 Kim Kardashian is no stranger to a leather ensemble, and she went full rock chick vibes for her nephew’s birthday.

Mason – who Kourtney shares with ex Scott Disick – was surrounded by loved ones, as little sister Penelope, 10, and younger brother Reign, eight, also showed up to party.

Stepping out in Los Angeles, reality star Kim, 42, put on an edgy display in a pair of high-waisted leather trousers, adorned with sparkly gems.

She showcased her waist in a cropped Up in Smoke Tour T-shirt and carried just the essentials in a tiny bedazzled purse.

Kim continued to sparkle with an eye-catching silver choker for jewellery, as well as a cross pendant.

As for her hair, she styled her long blonde locks in effortless waves.

Her appearance at Mason’s party comes after she shared an Instagram tribute to him on his special day.

Posting a selfie with the rarely seen teen, Kim penned above the image: ‘The day has come where you’re taller [than] me now.

‘I just love who you are and I’m just so proud of you Mason. Welcome to your teenage years. Happy Birthday.’

Mason’s mother Kourtney, 43, also proved that she’s not just a regular mum, she’s a cool mum in an all black look at her eldest’s birthday bash.

Kourtney flashed a hint of her toned tummy in a cut-out bodysuit, with her raven tresses worn in a sleek bob.

Meanwhile, youngest sister Khloe, 38, looked fresh off the catwalk in a jumpsuit.

Khloe served total Catwoman vibes in the skintight ensemble, and accessorised with shades and a jewel-encrusted purse.

As for the Jenners, model Kendall, 27, went glam in a stain black midi-dress complete with a lace neckline.

Maintaining the elegance, she wore a pearl necklace and scraped her hair back into a chic bun.

Last but never least there was Kris, who served business chic with an edge, wearing a black suit but forgoing a shirt underneath.

Mason’s dad, Scott, was spotted at the party and arrived with his kids, keeping it casual in black trousers and boots, with a warm coat on top.

He and Kourtney, while never married, were together for a decade, before they split in 2015.

They have continued to co-parent, however, and Poosh founder Kourtney now enjoys life in a blended family, along with husband Travis Barker and his children.

Blink-182 drummer Travis, 47, is father to his son Landon, 19, and daughter Alabama, 16, while he also remains close with 23-year-old stepdaughter Atiana, all of whom he shares with ex-wife Shanna Moakler.