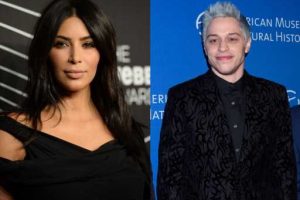 There was nothing to worry about when Kim Kardashian didn’t appear on boyfriend Pete Davidson’s New Year’s Eve special, they already knew that they had plans to ring in 2022 in their own way. The couple took off on a private jet on Monday to enjoy the lush beaches of the Bahamas together.

The duo has jet-set between New York and Los Angeles since hooking up after Kardashian’s October hosting stint on Saturday Night Live. But this holiday away marks a significant step in their relationship, which signals that things are more serious than just a fling. The couple rolled up to the tarmac like total ballers and boarded the steps to the airplane while still keeping their dress rather casual — Kardashian in all-black and Davidson in all-white with a baseball cap. (See the photos HERE.)

The vacation away from prying eyes might also indicate that the SKIMS founder is making bold moves away from ex Kanye West, who spent the latter half of the fall trying to reconcile with his wife. Now that there are rumors the rapper is dating actress Julia Fox, she probably feels comfortable in enjoying her relationship with Davidson to its fullest extent without worrying about her ex-husband’s tender feelings.

After a pretty heavy marriage to West, especially in dealing with his mental health struggles, Kardashian has reportedly been open to exploring a more significant relationship with the comedian. “He makes her feel good and she’s excited to see what happens,” an Us Weekly source revealed earlier last fall. That first holiday away with a new partner is always a telling sign — it either shows how magical the partnership is going to be moving forward or it indicates that there are rough seas ahead. Kardashian is probably hoping this trip sheds some light on how present Davidson will be in her life in the year ahead.